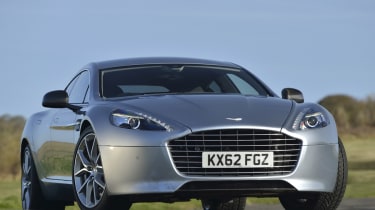 The Rapide S is now much more deserving of the Aston badge. It’s sharper and quicker than before, but feels just as much at home on some of Britain’s more rutted roads. It has so much more character than a Porsche Panamera Turbo S, but it’s far from perfect. The infotainment system is almost unfathomable and those rear seats are a little too cramped.

The best place to test the new Aston Martin Rapide S has to be in the UK – after all, it’s where the development team has spent most of its time honing this facelifted four-door.

It feels right at home on UK roads, too, helped in part by the new adaptive dampers. Keep them in Normal mode and it flows over cracked tarmac that other supercars struggle with.

Sport and Track modes are progressively firmer, helping to improve cornering slightly, but the Rapide S is so impressive in Normal mode that we ended up leaving the suspension button well alone during our test.

Aston has also mounted the engine 19mm lower and retuned the steering. As a result, this car feels more responsive than the old Rapide – in fact it now feels more like a sports car than a GT cruiser.

The steering itself is hydraulic rather than electric, offering a nice amount of feedback without constantly wriggling around in your hands.

It’s not as frantic as Porsche’s Panamera Turbo S, or even the Audi RS7 but it’s plenty quick enough, and you feel in complete control at all times.

The cabin looks and feels great, but we wish Aston had updated the centre console to mirror the Vanquish. Some switches are tiny, and the main menu is displayed on a minuscule black and white screen mounted above the clock, which is difficult to use, rather than the large colour screen.

Then there’s the Rapide’s ever-present problem – as a four-seater, it’s not great. The back seats really are for short trips only. Nevertheless, the Rapide S is a truly desirable car to drive and handles wonderfully. And the good news is that there’s no change to the price.