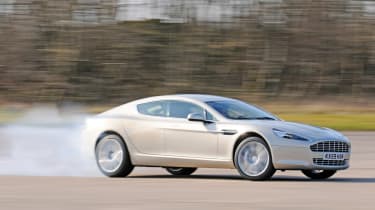 Aston Martin’s hall of fame has a new hero! The Rapide is one of the best models in the manufacturer’s illustrious history. It looks fabulous, boasts amazing luxury and has the kind of build quality that we always knew the marque could produce. However, the most impressive part is that the Rapide combines an involving driving experience with brilliant refinement and decent practicality, too. It really is a wonderful all-rounder –and a car that Aston Martin should be truly proud of.

If you were lucky enough to consider buying an Aston Martin, but had a growing family, you used to be forced to look elsewhere on the grounds of practicality. That’s all set to change, though, with the launch of the firm’s new four-door, four-seat Rapide. We’ve already driven it on the twisting tarmac of Spain, but now Auto Express has got behind the wheel of one of the first examples to hit British soil.

The Rapide is the marque’s first saloon since production of the controversial wedge-shaped Lagonda ceased in 1989. Aston has done a sensational job of integrating the additional doors – the rear haunches are curved down into the flanks, reducing the emphasis on the extra sheet metal and drawing the eye along the creased shoulderline to the gill vent in the front wing. It makes the Rapide seem longer and lower than it really is, while unique 20-inch wheels, LED headlights and a new chrome grille top off the classy looks.

Remarkably, it’s the interior access and cabin itself which spring the bigger surprise. Each of the four doors swings outwards and upwards to avoid scuffing the paint on raised pavements. Despite the trick openings, rear access isn’t easy as the aperture is relatively small. But once you’ve swung over the sill and into one of the buckets, the comfort on offer impresses.

The seats are heated and cooled, and each passenger gets their own air-con controls. And while you sit between the door and transmission tunnel, the effect is cosy, not claustrophobic.

Six-footers will feel more comfortable in the front, but children will be in their element. What really sets the cabin apart, though, is its bespoke feel. Wood, leather and cool aluminium create a genuine sense of luxury. Fit and finish are the best yet for a modern Aston, and the 317-litre boot is big enough to take overnight bags.

Underneath the skin lurks a true high-performance machine. Power comes from the DB9’s 470bhp 6.0-litre V12. It spins into life with a hollow bark, and emits a spine-tingling howl when you extend it to the 7,000rpm red line. On the move, the engine’s 600Nm of torque ensures excellent pick-up from relatively low revs. In combination with the slick semi-automatic six-speed transmission, it provides effortless pace.

Prodding the Sport button sharpens the gearchanges and throttle response, turning the Rapide into a proper sports car, while the beautifully finished magnesium steering wheel paddles further boost the Aston’s appeal. On the motorway, the interior is amazingly quiet, and occupants are cocooned thanks to the insulated windows. At low speed the ride is firm but controlled – although severe potholes send a shudder through the cabin. Hit the centre console-mounted suspension button and the dampers stiffen, which dents comfort but allows impressive body control through corners.

The Rapide features the firm’s bonded-aluminium chassis. Even though the wheelbase is 244mm longer than a DB9’s, it remains stiff, allowing for light, accurate steering. The rear tyres grip well, helped by the limited-slip diff – although the tail will slide if you turn off the traction control. New dual cast aluminium and iron brakes offer huge stopping power.

There’s no denying the Rapide is a deeply impressive proposition: it’s the best-built Aston ever. But the biggest surprise is the level of excellence shown in the car’s chassis, engine and supreme refinement. Those sensational looks are the icing on the cake.