We get behind the wheel of new four-door supercar - is this Aston's best ever car? 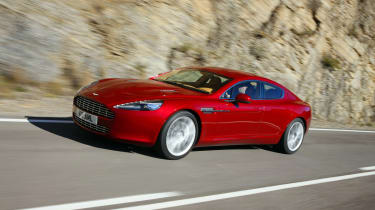 First opinionAfter the V12 Vantage, we didn’t think Aston could build a more exciting car to drive, but in the refined Rapide, the firm has scored a direct hit. Easily the most accomplished driver’s car in the makers range it also delivers impressive refinement and performance. We were impressed by the practicality too, but this car’s knockout punch is the way in which it combines these two very different characteristics in such a seamless fashion. Aston’s small but expert band of engineers should be proud of themselves.

Possibly for the first time ever, our review of a new V12 engined supercar starts with the back seats.

But what else would you expect? As the firm’s first saloon in more than 30 years, Aston Martin’s Rapide marks many new milestones, but the first question to answer concerns the leather-trimmed chairs in the rear.

Accessed through trademark “scissor” hinged doors – they lift up slightly as they swing open – the seats are mounted low to the floor, and when viewed in profile, are no more than two inches thick.

Getting in is not without its challenges, and if you are more than six feet tall you will struggle to swing gracefully through the narrow door aperture and down into the bucket shaped squab.

Once settled, however, the Aston springs its first genuine surprise. The seats are comfortable, and spacious. At six foot three inches tall, I comfortably fitted behind our Aston test car’s chauffer.

There’s no doubting that there’s plenty of luxury on offer too. A large transmission tunnel in the rear also provides a control panel from which drivers can adjust the heated and cooled seats, and control the £139,500 car’s only optional extra – rear DVD screens.

On the road, the ride feels firm but is never harsh. Body roll is well controlled, and thanks to those race style front seats, which taper toward the headrest, you get an incredible view of the road ahead.

Things promise to get even better behind the wheel. With an update of the firm’s bonded aluminium chassis, a new rear-subframe and revised suspension and brakes, the car’s 6.0-litre V12 engine offers 470bhp and a 0-62mph sprint of 5.3 seconds.

Adaptive dampers, like those fitted to the DB9 coupé offer standard and stiffer sport settings, and 20 inch alloy wheels at the front and rear promise masses of grip.

But on top of the new chassis – and radical interior layout, there’s a third Rapide revelation… In that the car is actually built in a factory in Austria – and not at the firm’s Gaydon HQ in the UK. Based on our test car, we would argue that this is the best quality car Aston Martin has ever built.

But despite all of these radical changes Aston is keen to point out that the Rapide, like all of the makers other cars in at its heart a sportscar.

At the front, there are new lights, and a “double deck” front grille. Smart vernts in the bonnet add a sporty touch, while chrome detailing, and carefully judged additions to the car’s smooth flanks help draw your eye downward, making the Aston look like it rides even lower to the road than it does.

From behind the wheel, the sportcar message is reinforced further still. The cabin layout shares much of its look and feel with the DB9 – with dash-mounted buttons to select forward and reverse gears.

Steering wheel mounted paddles allow drivers to cycle through ratios, while the firm’s jewel like instrument panel includes both digital and analogue displays.

The engine is started by pushing a sapphire tipped “key” into the dashboard. The V12 engine spins quickly and smoothly before bursting into life.

Power delivery is smooth and even, with power building smoothly as the revs climb to the near 7,000rpm redline.

Power is fed to the rear wheels and there’s a limited slip differential to improve traction in tight turns. Impressively the steering is pin point accurate, and there is bags of feedback through the hydraulic power steering system.

But perhaps most impressive of all is the car’s refinement. Whisper quiet while crusing on the motorway, the car rides smoothly over even the roughest road surfaces.

Added together, all of this  doesn’t just create a saloon that drives like a sportscar, but helps set a new benchmark for Aston Martin’s cars. The new Rapide isn’t just a great four-seater, it’s the best car the company builds.