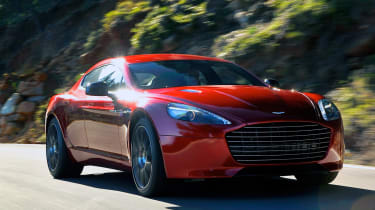 The Rapide S is not likely to be a huge seller for Aston Martin, but it’s a wonderful car all the same. It’s brilliant to drive, thanks to engine and chassis changes that have lifted its performance to another level. Yet it still struggles to deliver as a true four-seater, and that will always limit its appeal. Our verdict? It has plenty of pace, but needs more space.

There can’t be many people who thought the existing Aston Martin Rapide needed any more power or performance. The four-door coupe’s 6.0-litre V12 engine produced a towering 470bhp, and combined supercar pace with an electrifying soundtrack.

But Aston Martin clearly thought there was something missing. How else can you explain the major power upgrade for this new S version, which replaces the original car.

It boasts an extra 80bhp from a reworked, higher-revving engine, which incorporates innovative lightweight hollow camshafts. That’s enough to bring the Rapide’s already-quick 0-62mph time down from 5.3 seconds to just 4.9 seconds, and add another 2mph to the claimed top speed, which rises to 190mph.

Although it’s a four-door, this car is definitely closer to a coupe than a luxury saloon. The rear is beautifully trimmed and finished, but the seats are narrow, the roof is quite low and there’s not much legroom for adult passengers.

You wouldn’t have any trouble persuading adults to squeeze in for a brief taste of the Rapide’s glorious performance, but you’d have fewer volunteers if there was an eight-hour drive involved.

Other changes to the S include an enlarged grille, bigger bootlid spoiler, revised suspension set-up and a new track setting for the adjustable dampers. This turned out to be perfectly suited to the smooth Alpine passes that we drove the car on, keeping the body tightly controlled and making it easy to keep the two-tonne Aston on a chosen line.

Steering is brilliant – light yet extremely accurate – and the Rapide loves the challenge of a twisty road. The price for making rapid progress is paid by the brakes – the pedal gets quite soft after you’ve worked the discs hard a few times.

The naturally aspirated V12 lacks the instant punch you get from turbo cars like the BMW M5. But this engine loves working hard, really getting into its stride as the rev needle passes the 4,000rpm mark. The power swells without any interruption, accompanied by a spine-tingling sound, and the V12 pulls strongly all the way to 6,750rpm, where peak power is produced. It’s not the most modern engine on the market right now, but it remains one of the most characterful.

Running costs are still as high as you’d expect. Claimed fuel economy is 19.9mpg, but you need to drive very carefully to get near that. We averaged 13.5mpg over a journey that included both twisty mountain roads and some relaxed motorway cruising.

But then, if you can afford the £149,950 asking price, you’re unlikely to be concerned by the cost of filling up the 92-litre tank. Indeed, as Aston Martin hasn’t priced the Rapide S any higher than the outgoing car – despite the extra performance – you’d almost consider it a bargain.