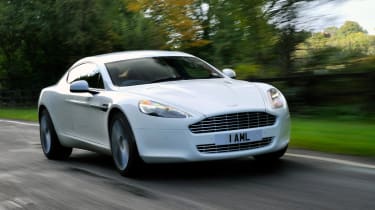 No rival can match the Aston Martin Rapide’s unique appeal. Few cars blend performance and luxury in quite the same way, and Porsche’s Panamera is nowhere near as good to look at. Even though these changes mean the 2012 car is now more focused on driving thrills, it’s still a capable and relaxing cruiser. It’s also extremely well put together, with a spacious cabin that offers seating for four.

Blink and you’ll miss the styling changes that herald the launch of the 2012 Aston Martin Rapide.
Tweaks include new windscreen wipers, sourced from the One-77 hypercar, plus privacy glass on the rear windows. And if you look really carefully, you might just spot the addition of a reversing camera.
Not exactly groundbreaking, but it’s a different story under the skin. Revisions include new spring and damper rates, plus recalibrated power assistance for the steering. A fresh exhaust system is louder than before, and
liberates 2bhp more power – up to 470bhp – to give a sportier feel.
To keep the focus on luxury, there have also been changes to the interior. The Volvo-sourced sat-nav has been replaced by a bespoke Garmin unit, while there are new leather trims and finishes. The car promises to more comfortable, as well as better to drive.

Cabin space is as good as ever, and the layout offers room for four adults to travel in comfort. On the move, the spectacular design and road presence literally stops traffic. But as great as this car is to look at, the good news is that it’s even better to drive.
The 6.0-litre V12 is obviously a big part of the appeal. At low revs, it’s almost silent, but still has enough performance to launch the car like a missile when you floor the throttle. At full chat, revs build smoothly, but once the engine passes 4,000rpm, special valves fitted to the exhaust blow flat, and the huge unit bellows its way to its 7,000rpm red line.
Top speed is listed as 184mph, and the strong in-gear acceleration suggests the car would have no problem getting there. Official figures claim the benchmark sprint from 0-60mph takes 5.2 seconds, but don’t describe the overtaking performance, which feels stronger than this.
Driven hard, the big engine is terrifyingly thirsty; during our time with the car, it gulped fuel at a rate of 9mpg. However, in sixth gear at cruising speed, things begin to look much better. We managed around 20mpg on a motorway run.
With that in mind, there’s no doubt that the car makes a decent cruiser. The slippery shape and well insulated interior mean there’s little wind noise – until you hit broken tarmac or concrete surfaces at speed, when you have to raise your voice to make yourself heard. Yet on winding country roads, sports car handling makes up for this. The Rapide really is light on its toes.
Although you’re aware of the model’s size (it’s more than five metres long), the steering is highly accurate. It’s one of the few electro-hydraulical systems still available and feels reassuringly responsive.
There’s very little body roll, and the car remains composed on uneven roads. In short, it’s at least as involving to drive as Aston’s flagship DBS.
But ultimately, that’s where the Rapide’s message starts to become a bit mixed. It’s a great GT, yet has the soul of an uncompromising drivers’ car. In our opinion, the modifications mean the 2012 version’s exhaust is on the verge of being too loud, and the suspension is too firm.
At least the car has character in spades, and performance to match equivalent two-door machinery. If you’re looking for a supercar to tick every box, from practicality to performance, the Aston is a great place to start.
Share this on TwitterShare this on FacebookEmail