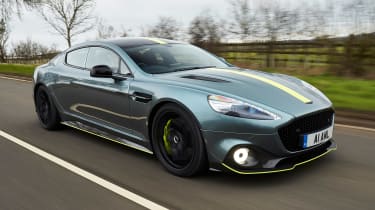 As a farewell to the Rapide and Aston’s naturally aspirated V12, this AMR model is easy to fall for. Especially when only 210 will be built. But you can’t ignore the fact that it’s incredibly expensive; and beyond the looks and glorious soundtrack, the cramped cabin, dated technology and woeful practicality count against it.

The Aston Martin Rapide is the longest-serving model in the brand’s line-up, and as a final swansong the elegant grand tourer has been given the once over by the British firm’s new Aston Martin Racing (AMR) division. The result is the Rapide AMR; the quickest, most powerful, loudest and most focused version of the Rapide ever built. Only 210 examples will be made and most have already been sold.

We’ll start with the obvious – the way this car looks. Bold, isn’t it? Thankfully, or not, depending on your taste, not every Rapide AMR that rolls down Aston Martin’s production line will come draped in the same lurid green detailing worn by our test model.

The neon makeover is one part of the ‘Signature’ scheme designed to draw a visual link between the liveries of Aston’s AMR racing cars and its most hardcore road cars. However, on such a large and elegant saloon like the Rapide it does looks a bit comical – like a middle-aged man in Lycra. 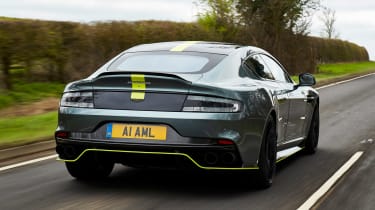 The theme is mirrored inside where you’ll find acid green piping on the seats and a stripe running the length of the roof. It’s not the most tasteful finish, but it distracts you from the Rapide’s interior flaws.

Having been around since 2010, the car is beginning to feel its age. The infotainment system, with its previous-generation Volvo tech, would look out of place in a hatchback, never mind a £200,000 Aston Martin.

Despite being over five metres long, the Rapide is also surprisingly tight inside thanks to the low-slung roof and enormous V12 packaged beneath the bonnet, while the two rear seats feel particularly snug.

The AMR treatment hasn’t been restricted to cosmetics, however. While the Rapide AMR has been designed as a goodbye for the saloon, it also serves as a fond farewell for Aston’s long-serving naturally aspirated 6.0-litre V12 – and AMR has ensured it’s in good form for its final outing.

The engine features a new and larger inlet manifold, dual inlet runners and a power increase to 593bhp. Add to that a new quad-exhaust set-up, carbon-fibre prop shaft, 10mm drop in ride height, carbon-ceramic brakes, tuned three-stage adaptive dampers and 21-inch forged alloys wrapped in Michelin Pilot Super Sport tyres, and you have a rather serious piece of kit.

On paper, the changes haven’t made a huge difference to the AMR’s performance; 0-62mph takes 4.4 seconds – so this car trails an Audi RS 3 – but the top speed rises to a fairly heady 205mph. Yet the one thing that is central to the Rapide AMR’s character – and quickly allows you to forget about its flaws – is the glorious V12 engine. 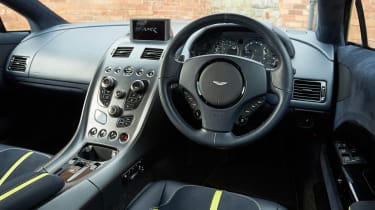 Once fired up, it comes to a gargling, bassy idle and dominates the driving experience the moment the wheels begin to turn. You probably won’t notice the extra 46bhp it has over a Rapide S, but once the motor hits its stride at 4,000rpm, it delivers unrelenting thrust all the way to its red line at 7,000rpm. If anything, the engine feels eager to rev beyond its limiter.

At this point, what you will notice is the added volume from the new quad-exhaust set-up. It’s the soundtrack of a dying breed of naturally aspirated V12s, a deep-chested wail that legislation and CO2 targets have sadly confined to the history books.

For such a large, heavy car, the Rapide AMR moves with surprising agility. The steering, which retains a hydraulic set-up rather than the electric system favoured by newer models, gives smooth and consistent feedback about what the front wheels are up to, meaning that you can place the car exactly where you want on the road. 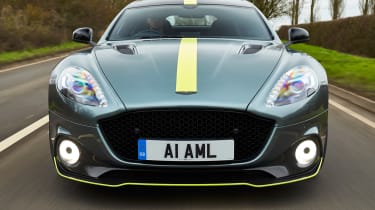 The ride is noticeably firm but it ensures the Rapide stays flat and level during any quick changes in direction, while the sticky Michelin tyres allow the driver to use more of the V12 engine’s power than in previous iterations of Aston’s grand tourer.

The gearbox isn’t the most sophisticated, however, and it can get a bit flummoxed when pulling away from roundabouts or junctions. You’ll also notice how cheap and flimsy the indicator stalk feels – which is quite an oversight on something you interact with so frequently.

The price tag is difficult to get away from, too. The noise, agility and exclusivity make the AMR unique in this segment, which includes the Mercedes-AMG GT 4-door and Porsche Panamera Turbo, but both are far cheaper, quicker and easier to live with. Not to mention more modern as well.