At last, we drive new premium baby on British roads... and give our verdict 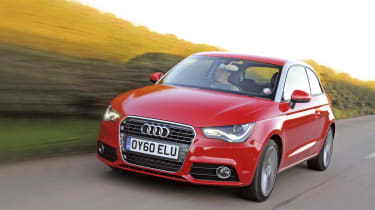 It may be small, but the A1 packs in all the same desirability as larger Audi models. And while the numb steering means it’s not as involving to drive as the MINI, it has plenty of other things in its favour. The 1.4 TFSI, seen here in 120bhp tune and hooked up to the twin-clutch S tronic box, is fast and astonishingly  frugal, while the modern rather than retro looks and high-quality cabin are streets ahead of the MINI’s. All this means that people who want a premium small car now have a genuine alternative to the ubiquitous British machine.

Advertisement - Article continues below
Style, quality and desirability – that’s what buyers expect from an Audi. And now, the German brand has distilled its values into  a much smaller  package with the hotly anticipated  A1. But how will the pocket-sized  premium hatch cope on UK roads?
Unlike its MINI main rival, which  is designed and built by BMW, this  new small car does not create an Audi sub-brand. Instead, it’s simply another model in the firm’s already expansive range which enables people to enjoy the same ownership experience as  with an A4, A6 or even an A8 limousine.
Video: watch CarBuyer's video review of the Audi A1
[[{"type":"media","view_mode":"content_narrow","fid":"69267","attributes":{"alt":"","class":"media-image"}}]]
For instance, you can specify the  A1 with a wide range of options you’d  normally expect to find only on larger cars. The virtually endless upgrades even include Audi’s new Multi Media Interface 3G with sat-nav hard drive  and 20GB of music storage, which until now has been offered solely on the A8.
Advertisement
Advertisement - Article continues below

What’s more, as with the MINI,  buyers can personalise their car’s looks with mild exterior and interior styling options. Little wonder that while the A1 starts at just over £13,000, some early orders have worked out at £25,000.
Advertisement - Article continues below
So, is such a small car really worth this much? Well, the A1 stands head  and shoulders above the competition  in one respect: quality. On the outside  it oozes modern chic, and the cabin  has an upmarket feel like no other car of this size. The solid metallic switches plus soft-touch dash – topped off by  a standard-fit pop-up central LCD  display – are all a pleasure to use.
Life is good for those in the back,  too. Although the sloping roof means tall adults will struggle for headroom,  legroom is more impressive. The boot is a reasonable 265 litres – around 15 litres less than in a VW Polo – and practicality is boosted by rear seats which fold down to give a flat load bay. Overall, the A1 seems very grown-up inside; it even makes the MINI appear childish. And this big-car feel continues on the move.
The first thing that grabs you is  just how incredibly quiet it is, even at  motorway speeds. On twisty roads it fills you with total confidence, carrying over the reassuring grip and unshakable body control seen in larger Audis. Sadly, it also shares other models’ minimal steering feedback, and as a result is ultimately not as much fun to drive as a MINI.
Advertisement - Article continues below
Advertisement
Advertisement - Article continues below
Another downside is the hard  ride. While it never feels unsettled,  you do get a nasty jolt whenever you  hit a speed hump or a pothole. This  means the A1 doesn’t feel quite as comfortable as the Polo, with which  it shares its underpinnings. But our  car was riding on optional 17-inch alloys and, as the Sport model, had firmer suspension settings, too.
It also boasted the cracking 1.4-litre TSI petrol turbo. The economical and punchy unit works well with Audi’s  S tronic seven-speed dual-clutch  paddleshift box, even when you leave  it in auto mode. While the engine  likes to rev, there’s decent mid-range torque because it’s turbocharged.
Unfortunately, the transmission isn’t as involving as the standard six-speed manual, plus it adds £1,450 to the price. But the fact it reduces CO2  emissions slightly, and brings the annual road tax bill down by £60 to £30, is some consolation.
Whichever gearbox you choose, though, the A1  is a very impressive package. Not only  is it the most upmarket-feeling small car, but  the fact sales will be limited to 18,000 a year means  it should  be more exclusive than the MINI, too.
Rival: MINI Cooper
started the premium small car sector and is still the benchmark. Unique style, cheeky sense of fun and sparkling driving dynamics have attracted a cult following.
Advertisement
Share this on TwitterShare this on FacebookEmail
Advertisement