The Audi A1 5-door Sportback is a more practical version of the A1 supermini, designed to take on the MINI Clubman 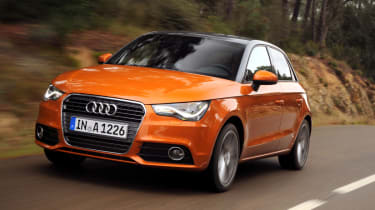 The extra pair of doors adds another string to the A1’s bow. Don’t expect a spacious family car though - access to the rear is improved, but it’s still fairly cramped for adults. Some will be put off by the high price, but spend some time in the high-quality interior, consider the high-end technology under the skin, and it’s obvious where your money is going.

The Audi A1 5-door Sportback remains a small car with limited practicality, but an extra set of rear doors certainly adds another string to its bow. It’s now a feasible option for families with small children. And with Audi offering a wide range of diesel and petrol engines, - all turbocharged and with stop start - there should be something to suit all needs.

Audi’s A1 5-door Sportback is slightly taller and wider than its 3-door sibling, but you’ll find very little penalty in terms of style. The sharp creases and dramatic LED lights, front and rear have been carried over. And the A1 5-door Sportback gets a range of new alloy wheel designs, ranging from 15 to 18-inch in size. The stylish cabin gets the same logical layout and as you’d expect from Audi - top-quality materials have been used throughout.

The Audi A1 5-door Sportback drives well too - its low weight and compact size certainly makes it agile through the corners, and the sharp and direct steering is nicely weighted, making it easy to drive in and around town as well as on motorways. Driving is further enhanced by the standard electronic differential aiding grip when needed. However the Audi A1 5-door Sportback suffers from a rather firm ride, and if you decide to go for the S Line or Black Edition models it becomes quite uncomfortable.

Diesel fans get the choice of 104bhp 1.6 TDI and 141bhp 2.0 TDI units, both of which are smooth and punchy, but don’t feel particularly sporty. Petrol options include a 85bhp 1.2 TFSI and a 1.4 TFSI with either 120bhp, 138bhp or 182bhp – all of which can be ordered with a twin-clutch seven-speed S tronic gearbox. These engines feel eager to rev and produce a growl from the exhausts that suits the A1 5-door Sportback’s character far better than the diesels.

All A1 5-door Sportbacks come with ESP and six airbags as standard. There have been no major recalls on the three-door version of the A1, and seeing as the 5-door Sportback is based on the same platform and uses the same engines, it’s a similar story here. Audi has an excellent record for reliability and build quality, so the Sportback should stand up to everyday use well – even if you choose to use it as a family car and put small children in the back.

Thanks to the extra six millimetres in height and six millimetres in width, the A1 Sportback has a little extra headroom and legroom compared to the three-door A1. All UK cars come with five seats as standard, but don’t expect masses of space in the back, tall adults will still find it a squeeze to sit behind one another. Boot space is on a par with the three-door – so that means 270 litres of space with the rear seats in place and 920 litres with them folded flat. You can adjust the height of the boot floor too, to either maximise space or raise it up to create a perfectly level loading lip.

Stop-start is standard across the A1 5-door Sportback range, and the cleanest model is the tax-free 1.6 TDI with fuel economy and CO2 emission of 74.3mpg and 99g/km respectively. Even the 182bhp 1.4 TFSI, capable of 0-62mph in seven seconds, returns 47.9mpg. The cleverest engine by far though is the brand new 138bhp 1.4 TFSI which features a development of the system already seen on the Audi S8’s 4.0-litre V8. It can shut down two of its four-cylinders on light throttle loads, saving around 5mpg of fuel – the result is 60.1mpg and 109g/km.