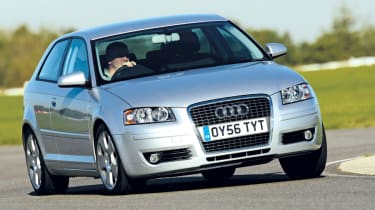 “A well made hatchback with an economical yet powerful engine. However, the high torque and DSG gearbox disintegrated the flywheel after 12,000 miles.”

“Excellent, apart from a ‘jiggly’ ride it does everything I want from a car and more.”

“Too many faults for the high class car its supposed to be along with unresponsive and awkward dealers.”

“Excellent. The boot interior shape could be slightly better to allow for golf clubs. Other than that the car is as expected.”

“Pleasantly surprised after coming from a BMW. Not the best handling car in class but pretty good. Fuel consumption brilliant, car much quicker than published figures.”

“The Audi A3 Sportback is a great, practical all round performer - even with the basic 1600cc engine. Good discount and PX allowance made purchase painless.”

Dropping out of the top 10 will be disappointing for Audi. Although it lags behind arch-rival BMW, it has at least beaten Volvo and Mercedes. Part of the reason for the firm's drop could be reliability niggles. Over the last three years, just over half of Audi's customers reported some sort of fault – that's more than Ford, which is hard to justify, given the price of four-ringed top-sellers.