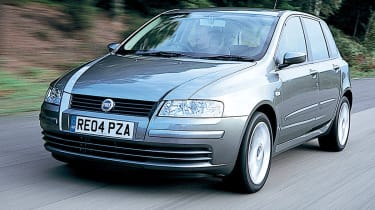 “Owning a Stilo is a bit like a marriage. When it's going well, everything is great. But when it starts to go wrong, it really does start to get expensive.”

“Love the looks and the drive but the reliability and number of failed components that I have had to replace is ridiculous. The dealer that changed the gearbox left a load of minor things not refitted properly: battery not refitted properly, relays not resecured, pipes cables etc not reclipped, exhaust mounting bracket not fixed properly, resulting in fractured exhaust. The rack was replaced under a recall at 50,000 because it was severely worn. What's to say the replacement wont go the same way and at my expense next time? I will have to replace the passenger seat airbag weight sensor again as its failed for the second time.”

“Excellent car very reliable with once a year maintenance.”

“No problems with it but with it only being a 1.2 it does struggle a bit to get going especially with a full car.”

“Looks good but badly made. Won't buy another.”

“When it is running it is quite a satisfactory car, it is responsive for a 1.6 engine and handles well. However, the reliability, or lack of it, makes it a terrible car. My particular Fiat has broken down on average every three months in the two years I have owned it!”

“Pretty decent car. Only letdown was the dealer support.”

One step forward and two steps back. While the Panda has made amazing headway in Driver Power 2007 with its excellent reliability rating, the rest of the range is still way below par, causing the firm to drop two places down the chart. Woeful ratings in the majority of your judging categories are difficult to explain. The worst come in the build quality and braking charts, where you voted Fiat into last place.