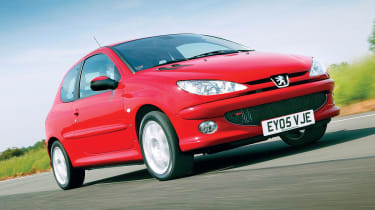 “The quality is disappointing. And there's a permanent problem with the driver's seat. I have to continually force it back so I can actually get in.”

“Great fun, but difficult to live with - mainly due to poor pedal positioning which aches your legs after long journeys. ”

“Overall it is good fun. Considering it only has a 1.6 engine, it picks up well, makes a good noise and handling is pretty good. The only problem is that the fun goes out of the window when I think about reliability. I bought a new car to avoid hassle but it spent five months of its first nine months faulty and in for repair! I waited almost three months for a faulty airbag to be fixed and when that was resolved, I had all manner of engine and ignition problems that took it off the road for another three months. This is a real let down and has put me off of Peugeot as the dealers don't seem to be able to fix the problems. ”

“Decent car for the price paid, however not very economical with fuel. ”

“Good little car on the whole, though 'road noise' when travelling is quite loud - economy is excellent, however.”

“I am generally pleased with my car I have had no major problems with it although it has developed an annoying vibration behind the dashboard when you reach a certain rev. It's a harder ride than I expected and you can watch the fuel gauge drop as you are driving, but it is very quick and fun to drive. ”

It's one of the most popular new car makers in the UK, but Peugeot is letting its customers down. The firm has done well to close the gap on Renault this year, but its customers are still a disgruntled bunch. The brand comes last overall in the ease of driving category. This is probably due to the grabby brakes and sloppy gearbox that are common to many generations of Peugeot models.