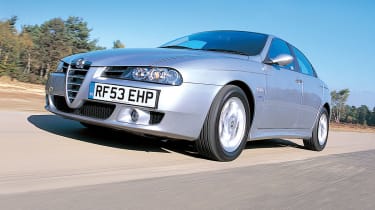 “The 156 has great potential, but it's let down by reliability - and mostly with electrical problems. It feels like a 'fragile' car - not what it could be. Shame.”

“Great driver’s car, better to drive than my wife's BMW. However, the car is very expensive to run with high depreciation and fuel costs.”

“2.4 sportswagon lifestyle rather than loadstyle, accept that and it's a great car, smooth with loads of torque, good economy and performance. Slightly heavy on the front but doesn't affect handling, good visibility, powerful brakes. After eighty thousand miles a few body/trim rattles but the five cylinder engine is a delight. Looking forward to the next eighty thou!”

“Very happy I get the performance of a petrol sports car with the economy of a supermini.”

“Brilliant driver’s car, a bit pricey on repairs after 3-4 years. ”

“Styling and engine can't be faulted... and still on original clutch! Depreciation has been a killer, though I still love the car.”

“Stylish car with excellent performance, if a little thirsty One problem is the petrol gauge which is absolutely useless.”

If there's one thing Alfa drivers have in common, it's concern for their car's reliability. The only firm with a worse record for problems and breakdowns is Renault. A worrying two-thirds of Alfa Romeo drivers have suffered a fault in the past three years. A quarter had electrical glitches, 17 per cent complained of suspension niggles, 11 per cent had engine trouble and 12 per cent gearbox and clutch woes.