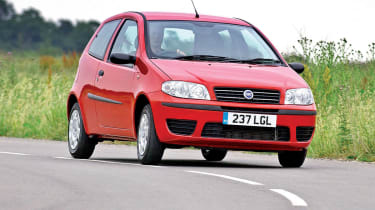 “A good car when everything works - which is hardly ever! I had a radiator fan replaced twice, the gearbox and engine resealed and faulty power-steering.”

“A good economical small car with plenty of space inside and good boot size. It is a little bit too light so motorway driving, especially in windy conditions can be a bit hairy.”

“1.9TD engine in a small car gives pokey performance with good acceleration and overtaking. Very comfortable for a small car. I am 6ft and no driving problems, except brake/gas pedals are a bit close for wide shoes! So far very reliable, hardly uses any oil and averages about 53mpg diesel. Overall quality and appearance very good.”

“Cheap transport - but not cheap enough - fuel economy is disappointing, servicing cost are higher than expected. Like previous small Fiats I've owned it's a decent enough cheap car that's OK to drive and reasonably reliable (poor build quality is just part of buying a cheap car!). But the running costs are not as good as I expected from previous experience - fuel economy of less than 40mpg from a small-engined supermini isn't great and servicing isn't that cheap either - although avoiding Fiat dealers helps.”

“It's my first car so to me it's better than nothing! It's been fine so far except the driver's window wasn't working due to the electrics but got that fixed in one afternoon! Could be a little bit faster as I do feel I'm struggling to keep up! But fuel consumption is brilliant so can't really complain. It's a nippy little thing and a good laugh to drive, although personally would rather drive my brother's new Mini Cooper!”

“It isn't an Aston Martin DB9, but it's just the job that I use it for. The car is well suited to me and all my needs. Cheap, easy going and the need to get to A to B.”

One step forward and two steps back. While the Panda has made amazing headway in Driver Power 2007 with its excellent reliability rating, the rest of the range is still way below par, causing the firm to drop two places down the chart. Woeful ratings in the majority of your judging categories are difficult to explain. The worst come in the build quality and braking charts, where you voted Fiat into last place.