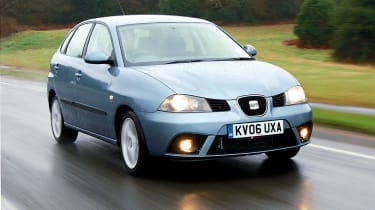 “Excellent car all round, but it's let down by poor ride comfort and a few areas of cost-cutting. For example, my car doesn't have hi-fi controls on the steering wheel.”

“Meets the requirements of a retired couple who use it mostly for pottery around, shopping and the occasional long drive. Compares favourably with other similar models.”

“It's pretty good, largely reliable and cheap to own and run .. so long as I keep it to independent garages as the dealers charges are excessive eg £200 for a quick look over and oil change.”

“Reliability is paramount, a Ferrari on the hard shoulder is not sexy! Does everything I thought it would, six speeds and a 1,000 revs equates to about 40mph; effortless cruising! Heater controls are a bit out of sight and for a top model in the Ibiza range, no boot light, really stingy.”

Mid-table mediocrity – it's hardly what SEAT bosses had been hoping for. Last year, the firm slipped three places down the chart, but we were looking on the bright side, expecting a rise in 2007 following the arrival of a raft of new models. Instead the VW-owned marque has dropped another two rungs. With sub-standard ratings across the board, you are finding SEAT ownership a bit underwhelming.