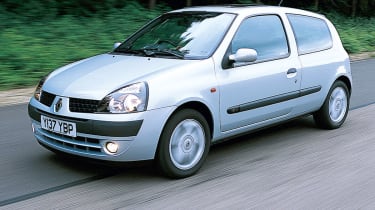 “My Clio is a Renaultsport 182 Cup, which is pretty cheap for the performance. But the trade-off is build quality niggles and low standard of trim.”

“Clio 65 dCi: great little car with a super engine; even in this lowest-power version. Pulls well, negating gearchanges on inclines, even when fully loaded. Runs out of puff at motorway speeds, although happy to sit at the limit all day if needed (and still returning 55+mpg). Ride is atrocious though.”

“The Clio 172 is a good car to drive, good handling, driving position and acceleration plus looks great. Insurance is not too bad, as long as you're not 20 years old. However, parts and labour are expensive. Replacing the little light on the radio display took an hour's labour and cost £70 to replac! The rear back box and mid pipe of the exhaust will cost around £580 from KwikFit. You may also be left wondering what happened to your fuel if you drive a little bit faster than normal.”

“It is a good car for driving around town and short distances. Does not have sufficient power on every occasion. Is a good car for a first time buyer, and is relatively reliable.”

“Excellent hatchback with very good economy that is good to drive.”

“Sporty and all-rounder, not much use for long distance commuting with baggage.”