The Audi A3 Saloon is set to be the biggest-selling A3 globally. Does it have appeal for UK buyers? 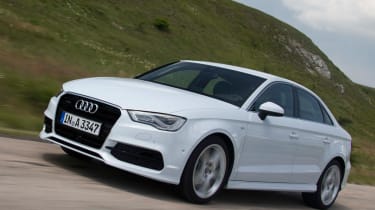 The A3 Saloon is set to be the biggest-selling A3 worldwide, but that’s down to markets like China and the US. In the UK, buyers are likely to stick with the hatch, despite the saloon’s excellent refinement and grown-up driving dynamics. It makes a great alternative to the A4, but for family buyers, the A3 Sportback has the edge with its extra rear seat space.

The new Audi A3 Saloon isn’t the first of the new breed of premium compact saloons – that honour has to go to the Mercedes CLA. But Audi has big plans for this newcomer, predicting it’ll go on to become the best-selling A3 within two to three years.

That explains why the saloon is changed so comprehensively from the three-door hatch and Sportback models – every single body panel has been updated to help create this new design.

In our eyes, it’s the most attractive member of the A3 family yet, and while the front end could be more adventurous, the sharp tail-lights are a really eye-catching addition.

The saloon measures 4,456mm, making it 150mm longer than the Sportback, but with an identical wheelbase. It’s also 11mm wider and 9mm lower, plus 35kg heavier.

As you’d expect, the saloon is extremely refined. Even on a cold start, this 2.0-litre engine is smooth and quiet, and provides really flexible performance. Its maximum torque of 320Nm arrives between 1,750 and 3,000rpm, providing a nice, progressive punch of acceleration in the mid-range and launching the car from 0-62mph in 8.7 seconds – a tenth of a second slower than the three-door, and identical to the Sportback.

On the road, the A3 saloon feels a little bit firm, but even with the optional sports suspension fitted, you never have to worry about crashing into large potholes or rattling over drain covers – it simply deals with everything quietly and comfortably.

All versions of the saloon use a multilink rear suspension set-up, which is better at dealing with rough roads and improves the handling. On the Sportback and three-door models, any engines with under 120bhp get a more basic torsion beam rear axle.

In typical Audi fashion, it’s difficult to criticise the handling, other than to say it’s a little uninspiring. The steering feels direct and quick enough without providing too much feel, and the chassis has enough grip to tackle corners at surprisingly high speeds, without much excitement. But that kind of involving drive won’t be key for most buyers.

Cabin quality is higher than you’ll find in the A4 and even gets close to the A5. The level of refinement on the motorway isn’t far off what those models can achieve, either, so A3 saloon buyers only need to be concerned with the amount of space on offer.

The boot has a capacity of 425 litres, which is 45 litres more than in the A3 Sportback and 55 litres less than in the A4. Fold the rear seats down, and you can extend the boot to 880 litres, plus there’s even the option of a load-through hatch and a reversible floor mat.

It’s in the back where you’ll be more aware than anywhere else of this car’s label as a ‘compact’ saloon. If you’re over six feet tall, and plan on sitting up straight, then you’ll definitely brush your head on the roof. You can slouch a bit to avoid it, as there’s a fair amount of legroom, but it’s harder to get comfortable than it should be. The CLA is no better in this respect, though.

The A3 saloon is available to order from next month, with first deliveries in October. Full prices haven’t been revealed yet, but we were told to expect a premium of about £800 over the Sportback – so it’ll start at around £20,600.

Hatchback-loving UK buyers may not be won over by the A3 saloon, but the fact that it feels just as grown-up and refined as the A4, and for £4,000 less, may be enough to sway some – as long as they can deal with the slightly cramped back seats.