The distinctive design of the A7 remains smart and elegant, while interior tech takes a big leap forward

Like most of Audi’s core range, the A7 isn’t a radical redesign but an evolution of the shape of the previous car. However, the shortened overhangs and extended wheelbase give the sharp four-door coupe a more athletic profile than the rather lardy-looking old model.

A number of details also mark it out from the old car, including the extra-wide grille, sleek-looking headlights and prominent styling lines. But it’s the large and distinctive single-piece OLED rear light bar that really marks it out – for a company considered to be quite conservative it’s a pleasant surprise. The clever light ‘animations’ when you lock or unlock the car are either very cool or a bit showy depending on preference. The rear spoiler, which pops up at speeds of over 75mph, remains. 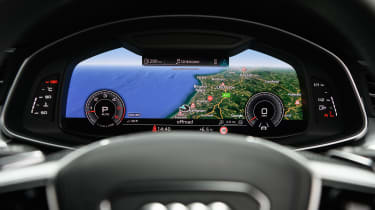 Inside, Audi has adopted the same minimalist approach as the larger A8, but there’s a bit more of a driver focus thanks to the angled dash and lower, sportier driving position. The button-heavy layout of the old car is replaced by a slick-looking dual-screen infotainment system controlling almost every aspect of the car’s comfort and infotainment functions. A new generation Virtual Cockpit also features, and is standard on every car.

The dual screen infotainment system itself is hugely clever, sharp to look at and instantly impressive. The touchscreen surfaces are haptic, delivering feedback to the touch when pressed. It means instead of tapping lightly as you would on a tablet or smartphone screen, you’ll have to actually press the screen like it's a button. But once you’re used to it, it’s a fantastic set-up to use. It’s probably still beaten for ease of operation on the move by a good old fashioned rotary switch, though.

As you’d expect, the quality of materials and fit and finish is largely faultless. The quality really matches the flagship A8, though the layout and design is a bit sportier compared to that of the firm’s limo.