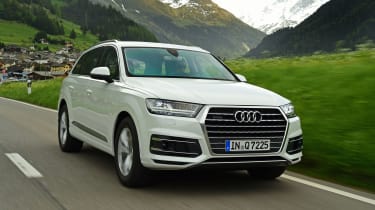 The all-new Q7 may not look radically different than the old car, but it's hugely improved. It's a very comfortable, practical and extremely well made seven seater SUV that's also surprisingly fun to drive. However, the low power 215bhp Diesel engine isn't out pick as it lacks the punch and refinement of the 265bhp version for very little saving.

The new Audi Q7 is all about offering more. More space, more tech, more performance, more efficiency and more comfort. Well, that's what Audi claims - but then every new car should be an improvement, otherwise what's the point? While externally the new Q7 doesn't seem all that different, under the skin things have moved on significantly.

We were greatly impressed with the car when we tested a pre-production model in the Namibian Desert, but this is the first time we have driven the showroom-ready version on European roads and with the new lower-powered diesel engine.

The first thing to note about the new Q7 is that it's the first car to be built on VW Group's new MLB platform - it's for vehicles with longitudinally-mounted engines and will be used for all front-engined Audis from the A4 upwards. Here, MLB helps make the new Q7 up to 325kg lighter than its predecessor, and much better to drive as a result. 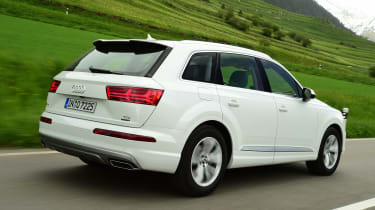 There's a greater precision with the way the new Q7 drives and you can tell what the car is doing beneath you where you just couldn't in the old model. This gives you more confidence in the handling, and while it's no sports saloon, for something that can carry seven people and go off road the Q7 can be surprisingly fun.

Even more impressive is the ride quality. Our test car was fitted with the optional adaptive air suspension which delivers a delicious silky-smooth ride even with the Audi Drive select in the sportier 'Dynamic Mode'. Annoyingly, the switchable air suspension is only available bundled with a selection of far less beneficial driver aids. These include Predictive Efficiency Assist, which uses the sat-nav to read the road and gives you tips on improving your fuel economy, which it can do by up to 10 per cent. But then if economy is your key buying criteria, maybe a Q7 isn't the best choice.

To be fair the claimed 52.3mpg of our 215bhp 3.0-litre V6 diesel test car is very good for a luxury seven-seater SUV. The performance is reasonable too: 0-62mph in 7.4 seconds is quite impressive on paper, and for the most part you could argue this all the engine you need. However there is a marginally less economical 268bhp version that has noticeably more get up and go and can cover 0-62mph almost a second quicker.

With an extra 100NM of torque it makes overtaking much easier than the 215bhp model and will cope better when fully loaded or towing- all for a premium of just £2,350. And, frankly that's chicken feed in the world of Audi upgrades. Plus, the more powerful diesel is quieter and more refined.

In all models power is sent to all four wheels, with a maximum of 85 per cent going to the rears via an eight-speed Tiptronic automatic gearbox. For the most part the auto responds quickly enough and is smooth, though on occasions when pulling up it clunks down into first. This, some minor wind noise at the A-Pillars and a diesel rattle under acceleration from the lower-powered engine are the only mirror detractions for an otherwise wholly pleasant and very relaxing driving experience.

A well crafted, neatly designed leather-clad cabin helps too. As does that fact that despite being shorter and narrower than before the new Q7 is more spacious inside. The middle row can easily seat three adults abreast and each chair slides and reclines independently. 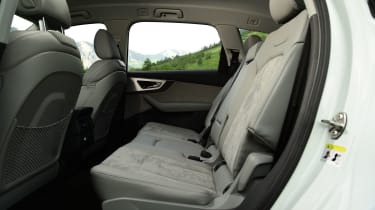 UK cars get seven seats as standard and the third row fold out of the floor electrically, have ample room for children and even feature ISOFIX fittings. With them folded the boot space of 770 litres is bettered only by one rival - the Range Rover Sport - while a powered tailgate is standard.

All models also get parking system plus, Trial access to Audi Connect, which includes 4G internet connectivity, Apple Car Play and Google Android Auto plus there's also MMI navigation plus with an 8.3 inch monitor. You can upgrade the normal instrument dials to the virtual cockpit first seen on the Audi TT. And of course, there are a whole host of other options and the very latest driver and safety aids to separate you from your cash. But then the Q7 is all about offering more - including more ways to spend your money.