We've driven the facelifted Audi Q7 in diesel form already, but does the more expensive petrol version have the edge over its sibling? 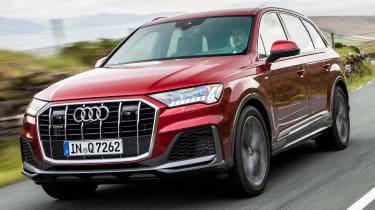 The new 55 TFSI mild-hybrid powertrain makes a lot of sense in the Audi Q7; its smooth, quiet operation and effortless performance match the car’s new, more luxurious character. The facelifted Q7 is still one of the best luxury SUVs in its class – but the 50 TDI will be a better pick for most buyers when it comes to running costs.

We’ve already driven the latest Audi Q7 in 50 TDI V6 diesel form, but the more powerful model in the standard range is the new 3.0-litre V6 petrol, badged 55 TFSI – the first time that mild-hybrid petrol power has made it under the bonnet of Audi’s largest SUV. Audi reckons the adoption of this mildly electrified drivetrain imbues the chunky Q7 with improved refinement, performance and efficiency.

Our test model was a German-spec car with some differences, but was roughly representative of top-of-the-range Vorsprung specification; in the UK, this will include 22-inch alloys, all-wheel steering, power-closing doors and just about every driver assistance and safety system available. Our car featured active roll stabilisation too, but this feature will not be offered to UK buyers.

In any case, luxury is the order of the day – a fully kitted-out Q7 is a very relaxing place to spend time, with its cabin boasting high-quality materials, soft leather and excellent levels of refinement on the move. And even with our test car’s adaptive sport air suspension set-up, ride quality is excellent, exhibiting much greater control than an equivalent Range Rover, with remarkably pliant damping.

The 55 TFSI model fits this luxurious character well: it’s quieter than the 45 TDI under all but the harshest of throttle inputs, and delivers its considerable power in a linear, easily modulated manner. It helps make the Q7 very fast too: 0-62mph takes 5.9 seconds and in-gear performance at overtaking speeds is similarly brisk. 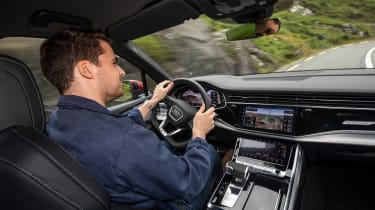 Push on down a country road and there’s plenty of grip and traction, along with great body control and accurate, light steering that helps placing the Q7 feel reassuringly easy. It’s not especially involving but feels planted; the new Q7 is a large SUV that manages to keep its composure, yet stops short of being sporty.

A powerful petrol-engined Q7 isn’t going to be cheap to run, however – those worried about fuel costs will be better served by the similarly capable 45 or 50 TDI models. Official fuel economy and emissions figures are not yet available, but the 55 TFSI is likely to sit on par with its BMW X5 xDrive40i and Mercedes GLE 450 4MATIC rivals in this respect, so around 30mpg on average. Expect CO2 emissions to be somewhere in the region of 190g/km.