Has a switch to petrol power improved the blistering Audi SQ7 SUV? We find out... 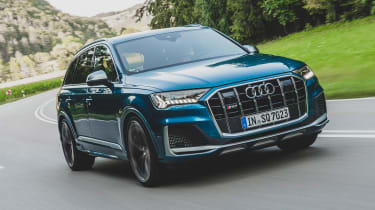 The Audi SQ7 makes a case for itself as the performance SUV to buy if you still value comfort alongside pace. It’s not as exciting as rivals from Mercedes or BMW, but its potential as a long-distance cruiser and its comfort around town, on less than ideal tarmac, is impressive. While the switch to a V8 petrol engine makes it a more powerful and a faster car than before, it will also cost a lot more to run as well.

This is the latest version of the Audi SQ7 - the brawniest iteration of the brand’s biggest SUV and now with a crucial twist.

Audi has ditched the old V8 diesel and opted to fit a new 4.0-litre twin-turbocharged V8 engine in its Range Rover Sport SVR rival. It’s a move not really made with Europe in mind, instead with a focus on boosting SQ7 sales in North American and China, where performance diesels remain niche and large, powerful SUVs like this are in demand.

The new 4.0-litre V8 is found in everything ranging from Audi’s own RS 7, to the Porsche Panamera, Bentley Continental GT and even the Lamborghini Urus.

For the new SQ7, the V8 is tuned to develop 500bhp - a leap of 71bhp - and 770Nm torque. The power increase has had a significant impact on the 0-62mph time of the SQ7; what was once just under five seconds is now much closer to four, with the benchmark sprint completed in just 4.1 seconds. It’s a serious performance upgrade, and with it comes V8 muscle-car character in a seven-seat SUV. 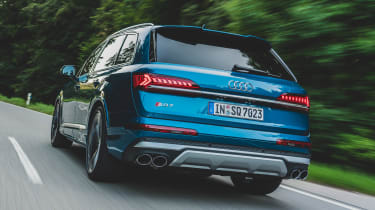 The SQ7 is nowhere near as frugal as it was before, but the new engine brims with noise compared with the more serene nature of the old diesel. If we’re being hypercritical, it’s an engine short of the character displayed by Mercedes-AMG’s very own 4.0-litre V8, the 4.4-litre engine used in the BMW X5 M50i, and the supercharged 5.0-litre of the Jaguar F-Pace SVR.

However, the SQ7 is a different animal to some of the other hot SUVs on the market right now, and the name is a bit of a giveaway. Leaving it short of full-fat RS badging means that there’s adequate space to leave a bit of comfort and refinement in reserve, where many rivals take a more uncompromising approach to maximum performance. The result is a hot SUV that upon closer inspection, makes a bit more sense than you’d originally anticipate.

Drive is smoothly put to the road via the quattro all-wheel-drive system and eight-speed torque converter gearbox. But it’s the ride quality that stands out most; adaptive air suspension with bespoke ‘S’ tuning is standard  and left in comfort the SQ7 certainly rides with a far more forgiving edge than in any powerful BMW or Mercedes SUV. 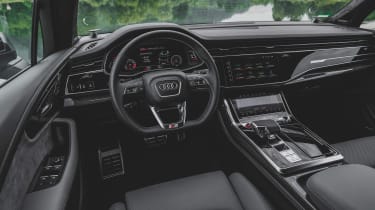 And it does this without sacrificing body control. Select Dynamic on the drive mode selector and you’ll feel the ride firm up, however, it’s still more comfortable than its rivals. Few performance SUVs feel outstanding in the corners and the SQ7 is no different, but it feels easy enough to place on the road thanks to active all-wheel steering.

Elsewhere, the upgraded interior sees the arrival of a combination of central touchscreens and a fully-digital 12.3-inch Virtual Cockpit instrument panel, but telltale SQ7 touches such as sports seats embossed with the ‘S’ logo and a new sports steering wheel mark it out. The exterior of the car gets a sportier bodykit than the rest of the Q7 line-up too, while equipment levels are carried over from regular S-Line versions of the Q7.

The SQ7 is available as both a five-seater or seven-seat SUV, while boot space remains at an enormous 705-litres with the third-row of seats folded. For more standard kit, luxury appointments (such as ventilated massage seats) and driver assistance features, Black Edition and Vorsprung edition models sit above the regular SQ7 with their own line-up of unique design tweaks and equipment lists.