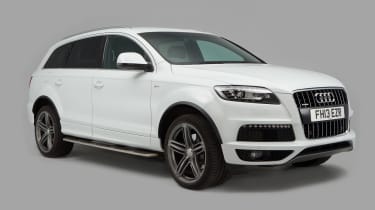 While the big Audi Q7 is limited off-road, it can do pretty much anything else you ask it to. It’s a superb cruiser, great people carrier and accomplished tow car, and is very desirable. Unsurprisingly, for such a big car, running costs are high, even if you buy the most frugal 3.0 TDI; bigger diesel and petrol models are especially expensive to run. As well as big fuel bills, expect to pay a lot for insurance, tyres and servicing – but the Q7 is worth making sacrifices for.

Audi had never built an SUV before it introduced the Q7 in 2006 – but you’d never know. As soon as it arrived, the Q7 racked up one positive review after another, thanks to its spacious cabin, muscular engines and the kind of top-notch build quality you’d expect from the company.

Incredibly, it’s already been a decade since the first Q7 was launched, but its replacement has only recently hit UK roads.

Admittedly, the first generation had started to show its age, but it’s still far from past its best. If you need a luxury cruiser that can carry the family, tow a trailer and even cope with some light off-roading, few cars are as accomplished as the huge Audi.

The Audi Q7 was released in 2006 and was available for almost ten years before being replaced by the current Mk2 in 2015. It’s the original Mk1 that we’re concentrating on here. 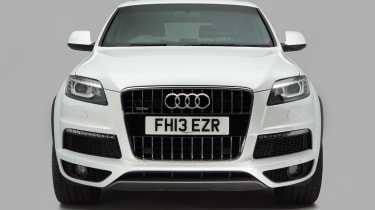 A year later, the standard eight-speed auto box and revised engines cut fuel consumption further. At the same time, a 3.0 TFSI six-cylinder engine replaced the previous 3.6 FSI and 4.2 FSI petrol engines; it came in 268bhp or 328bhp forms. The 3.0 TDI 204 from February 2012 was even more efficient.

All Q7s come with an automatic box, and only the diesel models really make sense; the 3.0-litre TDI is a superb engine, but the 4.2 V8 is even more muscular. 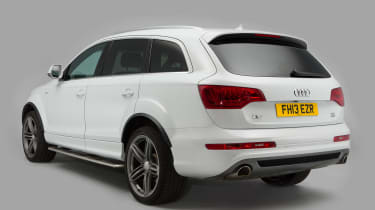 While the big Audi is billed as a seven-seater, realistically the third row of seats isn’t suitable for adults or large children for anything other than short journeys.

None of the three trim levels (standard, SE and S line) is short of kit, though. All feature alloy wheels, powered windows and climate control, along with air-suspension, cruise control, quattro four-wheel drive, seven seats and an automatic transmission. The SE adds heated leather seats, too, so it’s best to start your search at this level.

The S line looks smarter still, but does have firmer suspension, which some owners might find uncomfortable.

Alternatives to the Audi Q7 Mk1

There are several rival seven-seat SUVs available, but only the Land Rover Discovery has enough space for fully grown adults in all three rows. Mercedes’ GL is the closest competitor to the Q7 in terms of image and overall dynamics, although the best seven-seat SUV of the lot – at least in terms of driver appeal – is the BMW X5. It’s brilliant on the road. But much like the Volvo XC90 (the first SUV to offer seven seats), its third row is too cramped for anyone other than children. 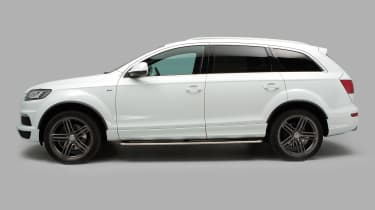 If seven seats are key, the Mitsubishi Shogun and Toyota Land Cruiser V8 are worth a look; both cars are superb off the beaten track, too, although neither can match the Audi’s class or on-road dynamics.

Although few Q7s are driven over rugged terrain, some cars used heavily off-road can suffer from exhaust damage, as the system isn’t particularly well protected.

Tyre wear can be a big issue, with rubber wearing out in just 6,000 miles. Using the car on its lowest suspension setting can help to minimise this problem. 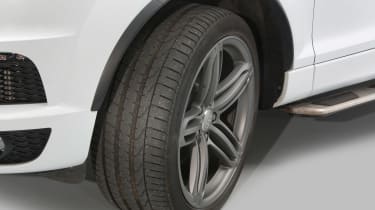 The Advanced Key system can be temperamental, refusing to lock or unlock the car. It’s usually due to a faulty ignition switch and is a simple repair.

Some owners of early Q7s have had issues with the diesel-powered auxiliary heater on TDI models; the cabin can fill with fumes in cold weather.

Built to Audi’s usual standards, the Q7’s cabin is massive and well stocked with gadgets, while there’s more than enough space for occupants in the first two rows. The boot expands from 330 litres when all seven seats are in use to a massive 2,035 litres with the second and third rows folded flat. 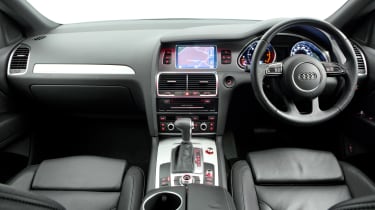 Q7 owners can choose between fixed or variable servicing schedules – the former means garage visits every 12 months or 9,000 miles, while the latter stretches this to as much as two years or 19,000 miles.

Once a car has reached three years old, it’s eligible for discounted maintenance, with a minor service priced at £199 and a major check-up £399. A new pollen filter is needed every other service (at £71) while an air filter has to be fitted every third visit, at £35. Expect to pay £87 every two years for fresh brake fluid and £79 each year for an air-con refresh. Luckily, there’s no cambelt to replace, and no requirement for new coolant, either.

For such a complex car, three recalls over a decade is pretty good going. The first came in September 2007 and affected Q7s built up to July 2007, which could suffer from the powered tailgate closing without warning.

The next campaign was in October 2014, for cars built from the start of 2012 until June 2014, because of potential brake servo glitches. The most recent recall came in April 2015 and it was aimed at Q7s built between April 2011 and 2012, which could suffer from fuel leaks. 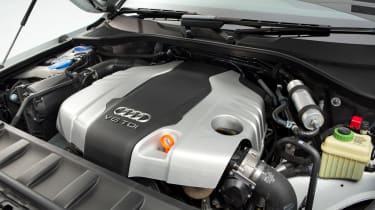 The Q7 has never appeared in our Driver Power satisfaction survey, but there are plenty of Audis which have. New models do fairly well, although older cars soon fall down the rankings, thanks to high running costs and poor reliability. Still, build quality is always a strong point.