The big 4.0-litre V8 diesel works surprisingly well in the new Audi SQ8, but the performance SUV is particularly expensive in Vorsprung spec 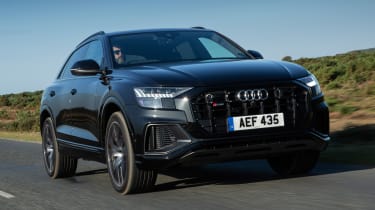 The SQ8 is an unconventional take on the performance SUV theme, but one that works surprisingly well. Its big diesel engine serves up monstrous performance, yet it’s also capable of returning decent fuel economy at the same time. However, in Vorsprung spec, at more than £100,000, this is an extraordinarily expensive vehicle. There’s far better value to be had if you choose the regular SQ8.

Given the plight of diesel engines and their continued demise in the UK, it appears rather peculiar to see that Audi has decided to offer a 4.0-litre V8 bi-turbodiesel in one of its cars. It’s perhaps even more peculiar to find out that it’s fitted to one of the firm’s high-end performance SUVs that costs in excess of £100,000.

But then the SQ8 is a slightly different take on the performance SUV theme. It’s powered by the largest diesel engine in any production car today – a 4.0-litre V8 – and it delivers some truly eye-widening numbers: 428bhp, 900Nm of torque and a 0-62mph time of 4.8 seconds. All in a four-wheel-drive car that weighs in excess of 2.5 tonnes with a driver and passenger on board.

That engine is also paired up with an electrical boost system, fed by 48-volt tech, that fills in for the two turbos at low speeds when they aren’t operating most effectively. On top of that, there’s an on-board mild-hybrid system, also powered by those 48-volt electrics, that harvests wasted energy and helps reduce fuel consumption. The SQ8 is far from a simple machine. 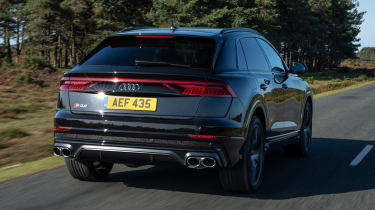 In the range-topping Vorsprung edition we’re driving here, the tech fest doesn’t end there. A sports differential, all-wheel steering and an electromechanical active roll stabilisation are all fitted as standard. That kit doesn’t come cheap, at a whopping £101,710, but do without the Vorsprung add-ons and a standard SQ8 comes in at a slightly more digestible £81,740. To put that in context, a standard Q8, powered by 3.0-litre V6 diesel, costs from just over £67,000.

Climb inside the SQ8 and it’s clear that your extra cash has all been spent on the greasy bits beneath the skin, because the cabin is largely identical to a regular Q8’s. In fact, there’s little to tell it apart from the cabin of an A6 saloon, which is half the price. That’s not to call it a disappointment, far from it, because it’s beautifully trimmed and luxurious. But it would be nice to be able to see what all those extra pounds were paying for, given the gulf in price.

On the move, the engine immediately stands out in the SQ8. It’s carried over from the SQ7, but is no less impressive here. A great surge of torque, all 900Nm, is served up from only 1,250rpm and provides instant and relentless thrust. The lag of a traditional diesel engine is all but eliminated by adding the electric compressor, making that 4.8-second 0-62mph time feel even quicker. 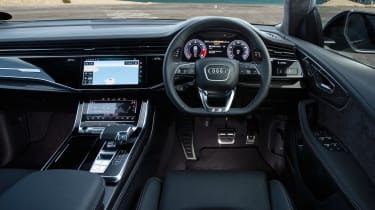 Despite the car’s sheer size it handles surprisingly well too; there’s only a whiff of body roll in its sportier ‘Dynamic’ driving setting – you can thank the fancy electric roll stabilisation for that –  while the enormous tyres at each corner bite into the road with real force, thanks to the quattro all-wheel-drive system.

The surprising sense of agility is helped even more at lower speeds by the rear-wheel steering. It allows the nose of the car to turn more keenly into corners, where you can then use all of that low-down grunt from the torquey 4.0-litre V8 to fire you through the corner and back out.

Ease off and the SQ8 is more than capable of playing the large family SUV role, too. The air suspension gives a soft, cushioned ride quality at lower speeds (even on 22-inch wheels) and on longer runs you’ll find you have little difficulty in matching Audi’s 36mpg claim. At a motorway cruise the engine is doing just 1,400rpm, which makes for effortless and refined long-distance driving.