Has Audi rewritten the supercar rule book again with the new R8 Spyder? We deliver our verdict in an exclusive first drive. 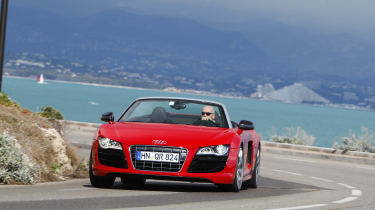 Forget the Spyder’s link to the standard R8 coupé – and ignore the fact that the chassis and engine technology is shared with Lamborghini’s Gallardo.The R8 Spyder is a machine with a powerful identity all of its own – and a demonstration of Audi’s latest efforts to add emotion and high style into its cars. By using the full range of modern driver’s assist systems – including the firm’s quattro four-wheel drive – the Spyder is truly brilliant on the road. Far from being a softened, gentler version of the either the R8 Coupé or Gallardo Spyder, the R8 is a sports car developed to be every bit as perfect as the Porsche 911. Only a relative lack of heritage and in-your-face detailing detracts from the package. No wonder it turns heads everywhere it goes!

The Audi R8 Spyder has finally hit the road... And Auto Express is first behind the wheel. Based on the same aluminium chassis as the R8 Coupé – a technology that’s shared with Lamborghini’s Gallardo – and sporting a near identical 5.2-litre FSI equipped-V10 engine, the drop top two-seat sports car looks more like an aggressively styled Italian track racer than a conservatively designed demonstration of German engineering excellence.

With the roof in place, the car’s compact dimensions are clear to see. While the roof of the coupé tapers gently to the car’s tail, the Spyder’s fabric top ends more abruptly, ahead of the engine.

To fold it away, you simply pull a switch in the cabin. The electrically operated system sees the rear deck open like the petals of a flower to receive the folded canvas top, before it lowers to hide the arrangement completely. The roof’s best party trick, however, is to fold itself away while the car is on the move. The system works at speeds up to 30mph.

With the top down, it’s clear that few changes have been made to the R8’s interior. Lockable storage has been added between the seats, and there’s room for a pair of hidden rollover hoops that are held out of view behind the headrests.

From behind the wheel, the experience is intoxicating. You sit so close to the front of the car, it almost feels as though you are positioned over the front axle, while a glance in the rear view mirror reveals the flat expanse of the back end. Things get even better when the engine starts. The noise from the twin exhausts is muted, but menacing at idle – and climbs to a wail as the revs head for the 8,000rpm red line.

Our car was fitted with a manual gearbox mated to the quattro four-wheel-drive system. This gave us high hopes for the driving experience, particularly given the appeal of the standard coupé.

Although open-topped cars are usually heavier and not as stiff as closed models, Spyder project leader Juergen Wacker told us the target when developing the R8 roadster was to retain the weight and weight distribution of the coupé – and its rigidity, too.

To help meet this challenge, extra structural body parts were added to the front and rear of the car’s frame, but at the same time, light aluminium panels, including the doors and engine cover, were replaced by carbon fibre ones.

As a result, the aluminium spaceframe of the Spyder tips the scales at only 216kg – just 6kg more than in the coupé. Perhaps unsurprisingly, the performance of the Spyder is not so different from the coupé. The open-topped car sprints from 0-62mph in only 4,1 seconds (compared to 3.9 seconds).

There are no such complaints about the chassis balance. Turning the car hard into a sharp corner creates understeer. A quick lift of the throttle helps cancel it out. If you want more pace and drama, jump back on to the throttle, and as the speed and power builds you get oversteer, just like a rear-wheel-driven car.

It feels safe, however. As the rear end turns out, the powered front wheels are pulling the car in the desired direction. In this environment, it’s clear the main difference between the roadster and coupé is the level of noise. Where the latter is insulated, the Spyder is, by its design, much noisier.

And there’s not much you can do about that, as the difference between driving with the soft-top up or down is minor. At speed, you won’t hear the aggressive engine sound – the roar of the wind drowns it out. Of course, there is one other difference between the two models – and that’s the price.

Although well equipped, the roadster costs an eye-watering £111,955 for an entry-level car, climbing to £117,155 for the R tronic-equipped automatic. The dramatic 19-inch alloy wheels on our test car are standard, but the optional ceramic brakes are estimated to cost an extra £5,000. The price will keep sales low – but for anyone looking to make the ultimate entrance, the R8 Spyder is definitely worth considering.

Porsche 911 Turbo S Cabriolet It might not have the looks to rival its Audi or Lamborghini peers, but the £109,000 Porsche makes up for it when it comes to performance. Packing a 530bhp 3.8-litre twin-turbo flat six, it does 0-60mph in 3.4 seconds and hits 196mph. Factor in a brilliant four-wheel-drive chassis, eye-popping brakes and a PDK seven-speed twin-clutch gearbox and you have an involving and accessible supercar. Plus there’s the bonus of two occasional rear seats for extra luggage.