The Audi RS5 is one of the more practical hot coupes

The Audi RS 5 Coupe uses a two-door bodyshell, but as it's based on the same MLB platform as the Audi A4 saloon, there's space inside for a 2+2 seating layout. The doors have frameless windows, which helps with access to the cabin, while the front seats tilt forward to provide access to the two back seats.

Of course, the RS 5 Sportback has the benefit of extra doors, so access is easier, while both cars have the same roof line as the standard A5 models, so access is reasonable - the only minor downside is a slightly lower ride height, so you have to duck a little lower to get inside.

The Audi RS 5 Coupe measures 4,723mm long and 1,861mm wide, which is 31mm longer and 15mm wider than the standard A5, although include the car's wing mirrors, and an overall width of 2,029mm is the same as the standard A5. The RS 5 Sportback is slightly longer and taller than the Coupe, but not enough to be significantly different. 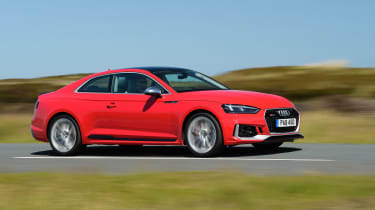 There’s enough space in the rear seats for adults, but legroom and headroom aren’t good enough for long trips spent there, and there's less space in the back of the RS 5 thanks to the large sports seats fitted up front. Passengers in the back will find that they’re feeling very cramped, but that’s true of every car in this segment, including the BMW M4 and Mercedes-AMG C 63.

There’s 465 litres of space in the boot, which is the same amount of space as the standard A5 Coupe, and is more than you get in a BMW M4 or Mercedes-AMG C 63 Coupe. The load area is wide and opens up easily, so there won’t be an issue with big suitcases or heavy bags. The back seats also fold 40:20:40 for extra versatility.

The Sportback version fills a gap between the RS 5 Coupe and RS 4 Avant. It has a hatchback tailgate, which opens to reveal 480 litres of space, which rises to 980 litres of space with the back seats folded.