Mighty quick in a straight line, but dull-sounding engine and inert handling put RS5 behind rivals

As you’d expect, the RS5 is mighty in a straight line, especially as that four-wheel drive system means the wheels stick to the road - and it’s the same story in the corners. It’s easy to throw into bends and power out of them, relying on the clever torque control system to send power where it can help pivot the car around the bend.

There’s loads of grip, but the RS5 is still behind the BMW M4 and Mercedes C63 S  for fun in the corners. Even though the Quattro system can send as much as 85% of drive to the rear wheels, there’s not much adjustability in the chassis. The neutral, balance means that rivals feel more playful and more rewarding to drive quickly. It’s great if you simply want to go really fast down a great road, but we’d still like it to be more involving.

The RS5’s quick steering and grippy chassis are complemented by a stiff suspension set-up when you select Dynamic mode. This reduces roll and makes the car feel sharper - and the steering is weighted well and has a decent amount of feel. It’s still a little way behind an Alfa Romeo Quadrifoglio in that regard, though. 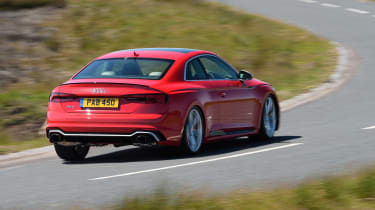 Flip the adaptive dampers into comfort mode and the RS5 settles down very well. It’s much more refined than a BMW M4 when you’re driving normally, and felt pretty comfortable on our French test route. While the RS5 has a dual character with its driving modes, it’s clearly focused on comfort over ultimate sharpness, as the Dynamic mode doesn’t make it feel like a totally different car, just a slightly stiffer one.

On the motorway the RS5 is quiet, composed and comfy - it’s what this car was built to do. The seats, driving position and high-quality interior all contribute to the RS5’s ‘fast cruiser’ feel. Of course the torquey engine means overtaking is a cinch.

However if you’re thinking of buying an RS5 on that basis, an S5 – or even the 249bhp high-power four-cylinder petrol – is a lot cheaper to buy, and you still get all of those things that make it a top motorway cruiser.

The RS5’s eight-speed tiptronic automatic gearbox is pretty good, changing gear quickly and smoothly. A parp from the exhaust on each upshift will please some (and annoy others), but the gearbox’s only real issue is the set of plastic, clicky paddles on the back of the wheel that seem cheap in a car of this price.

Thanks to a pair of turbos, the V6 offers up 444bhp. This means the RS 5 can do 0-62mph in 3.9 seconds, and it does feel extremely quick when you pin the throttle. But the dull engine note and torquey power delivery mean it’s more like a big diesel than a frantic, exciting petrol in character.

The torque figure of 600Nm is eye-catching on the spec sheet, and you can certainly feel that on the road. From 1,900rpm to 5,000rpm it surges, though that does sacrifice the top-end somewhat, so short-shifting is the way to go here.

The UK cars are equipped with a Sport Edition trim. Among other upgrades, this lifts the typical 155mph speed limiter found on many fast Audis up to 174mph. 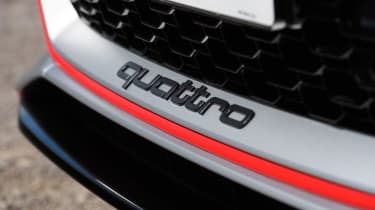