The RS5 offers impressive economy considering the performance on tap

As the Audi RS 5 is the flagship of the Audi A5 range, it carries a hefty premium over the rest of the line-up. Prices start from around £69,000, but you do get unique bodywork, a bespoke interior, enhanced handling and a huge whack of performance. The five-door RS5 Sportback carries an identical price to the two-door version.

Following on from updates to the range in 2019, which included WLTP-based emissions certification, the RS 5 range and the options available were slimmed down significantly. Beyond a few colour choices and a couple of infotainment upgrades – an uprated sound system and wireless smartphone charging, for example – the scope for going mad with the options list isn’t quite as extensive as with Audis of old.

With emissions of 211g/km, buyers will pay £1,295 for the first year of VED – this is usually rolled into the on-the-road price. According to the WLTP testing procedure, the RS 5 achieves 30.4mpg, but you’ll be lucky to get that if you try to extract any reasonable amount of the engines huge reserves of power. The diesel-powered S4 costs significantly less to buy outright, and thanks to a fuel consumption figure in the high thirties, will be much cheaper to run, too. 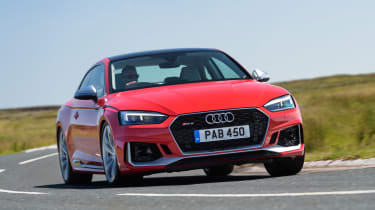 With 444bhp on tap, the RS 5 Coupe is a powerful sports car, so it's no surprise that it falls into insurance Group 44. If you go for the Carbon Edition, those expensive parts bump the RS 5 up into Group 45. These ratings are similar to rivals such as the BMW M4 and Mercedes-AMG C 63.

The RS 5 is a desirable sports car, as proved by its 54-57% residual value ratings after three years and 36,000 miles. That's competitive with the RS 4 Avant's score, and better than the Mercedes-AMG C 63 manages.