The Audi S1 has a premium feel which helps to justify its price, but the Fiesta ST has more standard kit

As you’d expect, the Audi S1 has the usual understated fast Audi look. The customary aluminium-effect mirrors, extended side sills, boot spoiler and smart 17-inch wheels help it stand out, while quad tailpipes hint at the performance potential.

Standard xenon lights with striking LED running lamps and a latticework grille give the S1 a distinctive face, while a choice of bold colours – including bright yellow, red and green hues – means it’ll certainly attract attention.

Being based on the regular Audi A1, that car’s short chassis – even in five-door guise – means the S1 looks squat and compact, with taut bodywork giving this pocket rocket real visual attitude. 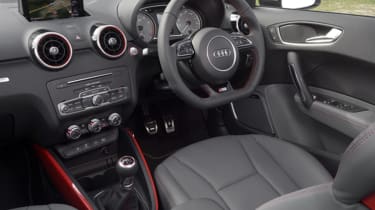 It’s countered by the Audi’s classy interior, which is in a different league to the Fiesta and even beats the new MINI for upmarket appeal. From the knurled metal finish of the heating and radio controls to the rising sat-nav screen and top-quality dashboard materials, the S1 looks and feels like a car from a class above.

However, the S1 has its roots in Audi’s past, so compared to newer models like the A3, it feels a bit dated in certain areas. And despite its hefty price tag, the S1 actually isn’t nearly as well equipped as the much cheaper Ford.

The Audi S1 doesn’t get sat-nav as standard, although it’s obviously on the options list. The standard audio set-up is a DAB radio with single CD player, also offering Bluetooth music streaming and voice control. You can upgrade the audio to a BOSE surround sound system with 14 speakers and 465 Watts.

The Technology pack brings sat-nav to the pop-up display on the top of the dash, and Audi connect which turns your car into a Wi-Fi hotspot and brings internet connectivity and various apps into the car.