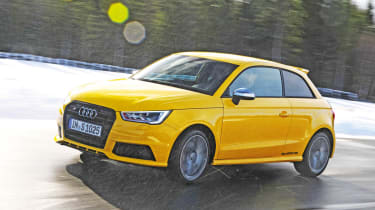 The Audi S1 is an interesting hybrid of upmarket supermini and high-performance hatch. Squeezing the S3’s running gear underneath has been a success, adding plenty of power and reassuring grip. It also looks subtle, but upmarket in a way that a Fiesta ST doesn’t. However, it’s not as fun as the cheaper fast Ford, either, and lacks the all-round ability of a slightly pricier Golf GTI. But because it’s priced between the two, and offers generous kit and four-wheel drive, too, it finds a sweet spot in the market all of its own. Audi has always been good at finding a niche...

Every so often, Audi adds a model to its range that raises an eyebrow. It happened when it blended TT RS and small SUV to make the RS Q3. And now it’s done it again, by shoehorning a 228bhp version of the 2.0-litre turbo engine from the S3 into the Audi S1.

It makes a sporty, bassy noise when you hit the start button, although it’s  not much louder than your regular A1. As well as its engine, the S3 has donated its four-wheel-drive system, which means you can feel a hint of mechanical shunting as all the various bits of transmission mesh together  to get you on the move. But slot the  slick R8-style manual gearknob into first and the S1 pulls away quite easily.  And what strikes you first is how grown-up it feels, both in terms of the classy, minimalist ambience of the interior, and the driving experience.

With the Drive Select set to auto, the smooth power delivery and comfortable ride on the standard adaptive dampers make the S1 feel like a bigger car than it is. In fact, you even find yourself reaching further for the gearstick than is necessary, as you feel like you should be driving something physically larger.

The S1 swaps the torsion beam rear suspension of the standard A1 with a more sophisticated four-link set-up. This makes the car feel softer when you’re cruising, and gives the rear end more capacity to soak up bumps in the road.When the road opens up, it’s the engine that shines. Switch to dynamic mode and you get firmer dampers, heavier steering and more noise fed into the cabin. This lets you hear the whoosh  of the turbo better as it forces the  engine into the higher reaches of  its rev range, endowing the S1 with  a serious turn of acceleration.

It’s really torquey, too, developing 370Nm – only 10Nm less than an S3 – which gives plenty of in-gear flexibility.  It makes dashing from corner to corner as simple as flexing your right foot. 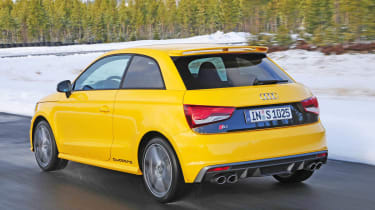 When you need it, the gearshift is good, too – its short, precise throw makes for quick changes so you can keep the engine working hard. The brakes are a bit grabby, but the pedal has been tweaked to ensure stopping power matches the engine’s grunt. However, driving hard does reveal that while the steering is pretty direct, it’s inconsistent over bumpier roads, giving a feeling akin to mild torque steer in a powerful front-drive car.

And that’s because a lot of the time, the majority of power goes to the front axle. It’s split 60:40 front to back normally, but will shift to 50:50 when needed. But it feels more than that, like most of the car’s mass is over the front wheels, pushing  them wide when you corner hard.

More rear bias, as you get with an xDrive BMW, would help the S1 feel more agile and more entertaining to drive, rather than just like a slightly heavy front-wheel-drive car. As well as taking the edge off the steering,  the four-wheel-drive system makes  up for the fact that it doesn’t have proper limited-slip diffs by relying  on the individual brakes to trim the car’s line through bends.

As well as cutting your speed  through corners, it occasionally  trims your line too aggressively, so  you end up correcting the line that  the brakes have pulled you into.  It doesn’t feel especially natural,  and makes the S1 seem a bit  unwilling to engage in the fun.But when you stop driving at full throttle, the quattro system gives the  S1 lots of confidence-inspiring grip when accelerating, particularly from a standstill or out of tight bends. Again, it adds to the grown-up feel that makes the S1 more desirable than a Ford Fiesta ST when you’re not attacking a B-road.

The Fiesta is much more fun, but  the cheaper Ford can’t come close to  the Audi’s rock-solid drive or its comfortable ride the rest of the time. The S1 also trounces the ST in terms  of its classy interior, while it’ll hold its value better come resale time.

Instead, think of the S1 as a baby  S3 or VW Golf GTI. It’s a distinctly desirable supermini, with the added bonus of a thump of acceleration when you fancy it. It’s not the most fun to drive, but it looks classy inside and out, and is a bit of a break from the norm. Similar in appeal, in fact,  to the RS Q3.