Thanks to its Volkswagen Polo underpinnings, the Audi A1 is sensible, but not sensational, from behind the wheel. However, the S1 version swaps the torsion beam rear suspension of the standard car for a more sophisticated four-link set-up, while revised front geometry, strengthened mountings and a faster steering ratio highlight the flagship’s bespoke nature and give it an extra edge over the normal A1 on the road.

In spite of its performance, the quattro drivetrain means the little Audi is composed. With a 60:40 split most of the time, the majority of power goes to the front axle, but it will divide up to 50:50 when needed, so the S1 has better traction than its front-drive rivals.

However, apart from a lack of torque steer and better traction, the Audi S1 still handles and feels like a front-drive hatchback. It’s also a bit nose heavy and will nudge wide as you reach the limit, but this does mean safe, predictable handling, while the four-wheel drive system gives plenty of reassuring grip to lean on for typically bad British conditions.

It does have a nice dynamic edge still, and you can push the S1 hard without the chassis falling apart, but while the steering is direct, it lacks the precision and feedback of a Fiesta ST. 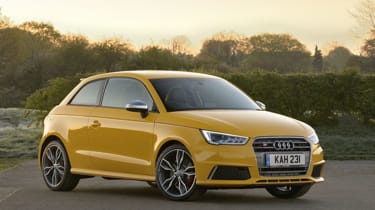 The stability control is a little intrusive, adding to the sensation that the Audi is missing the natural balance of the Ford’s chassis. Switch the Drive Select to Dynamic mode and you get heavier steering, firmer dampers and extra engine noise in the cabin.

But body control on the Audi S1 is good regardless, and there isn’t a significant increase in driver involvement or a noticeable sharpening of the handling. In fact it’s the harder edge to the engine note you’ll notice the most.

On a twisty road, the S1 has confidence-inspiring grip, but it lacks the fun factor of the Fiesta, or to a lesser extent the MINI. On the plus side, adaptive dampers are standard, and the Audi rides much better than the rigid ST.

There’s no ignoring the fact that the 2.0-litre TFSI is the star of the show. It’s mated to a light but sweet six-speed manual gearbox (there’s no auto option), which involves you in the experience further.

With 228bhp (as much power as a Golf GTI Performance Pack in a car one size smaller), it sprints from 0-62mph in just 5.8 seconds, and blasting off with the security of all-wheel drive is a real hoot. It’ll continue charging hard on to a storming top speed of 155mph.

However, it’s the serious in-gear response you’ll enjoy on the road. With 370Nm of torque – that’s just 10Nm less than in the bigger Audi S3 – you’ll find yourself punching from corner to corner far faster than you’d expect for a small hot hatch.