The standard Audi A1 is up there with the safest cars in its class, as it features plenty of safety equipment as standard and achieved a five-star Euro NCAP score. It comes with six airbags, ESP, Isofix and sealant foam to repair a punctured tyre.

Plus, it should be reliable – the 2.0-litre turbocharged petrol engine that powers the Audi S1 is well proven in the S3 and countless other models across the VW Group range, including the Volkswagen Golf GTI and SEAT Leon Cupra.

In spite of Audi’s upmarket image and reputation for quality, the standard A1 has finished low in the Driver Power satisfaction survey, with owners highlighting its poor ride, practicality and comfort. The car was also criticised for its poor reliability. 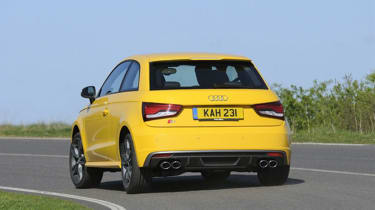 Audi as a brand doesn't fare very well in our Driver Power survey, either, with results in the lower half of the table when scored for reliability. Both results are disappointing, and with the A1/S1 using VW Polo underpinnings and the technology in the car has been around for a while you might reasonably have expected a better performance.

Still, the quality of the A1’s cabin is impressive and the S1’s drivetrain feels well engineered, and if you’re considering a MINI Cooper instead of the S1, it’s worth noting that the MINI brand came dead last out of all the brands surveyed for reliability,

The Audi S1 has the same level of cover as all its brand stable-mates, which means a three-year/60,000-mile warranty. So as long as you don’t hold to it for longer than usual, at least as the first owner you’ll know you won’t be forking out on any big surprise repairs,