It’s a class favourite, but can it stay ahead of the newcomer? 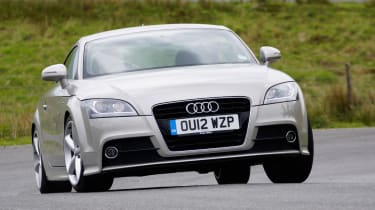 If Toyota’s new sports car wants to steal sales from established coupe contenders, then it has to face up to the Audi TT. A classy image, faultless build quality and well sorted handling mean that six years on from its original launch, the current TT has lost none of its desirability. Traditionally all this has come at a price, yet thanks to the introduction of the 1.8-litre TFSI engine, the TT is more affordable than ever. In fact, the £24,975 Sport is the same price as the GT 86, something that should worry Toyota. We’ve tested the TT in the sportier S line trim, but even then it costs just £1,070 more than the Toyota, while lower emissions and better residuals help reduce running costs and dispel the myth that opting for a premium badge means spending a lot more. Better still, sportier bumpers and subtle S line badging add to the attractive shape of the TT. And while its familiarity ensures it draws less attention on the road than the GT 86, few people would deny that the Audi has an extra pinch of style. The TT really extends its advantage when you slide into the driver’s seat. With top- quality materials throughout, the beautifully crafted cabin looks and feels more upmarket than either the Toyota or the Nissan. Smart details include a chunky gearlever, metal-ringed air vents, knurled air-con controls and a tactile flat-bottomed wheel. With chunky pillars and a narrow windscreen the glass area is small, but the driving position is perfect. As in the Toyota, the rear seats are of limited use, but split/folding means the TT is the most practical car here. Under the bonnet, the 158bhp 1.8-litre turbo engine (which was first introduced in the TT Roadster) is fantastic. There’s a lovely broad spread of power and you get the low- down urge missing from the Toyota. At the test track, the TT was just two-tenths of a second behind the GT 86 in the 0-60mph sprint with a time of 7.7 seconds, and was quicker to respond in gear, particularly in sixth. The engine is also impressively refined, while the raspy exhaust note and the slick action of the manual gearbox are the icing on the cake. In corners, the Audi is composed, turns in well and has strong grip. The smooth power delivery helps traction and the steering is nicely weighted. It doesn’t feel as alive as the rear-wheel-drive Toyota, but it’s far more agile than the heavy Nissan. It’s about as good as a front-wheel-drive car gets. In fact, if you think of this entry-level TT as an exceptionally good to drive, but far more stylish hot hatch, then you wouldn’t be far off the mark. That’s no bad thing, but in a test that’s focused heavily on the driving experience, is that enough for the TT to defeat the more powerful 370Z, let alone Toyota’s hugely talented new coupe?