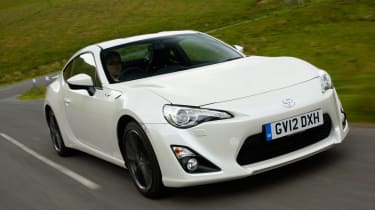 Toyota has a sports car heritage that stretches back nearly half a century. But in recent years, the Japanese maker has been more focused on practical cars. However, that’s set to change with the all-new GT 86.

Designed to reignite some of the passion found in the firm’s old MR2, Celica and rear-wheel-drive AE86 Corolla – from which the newcomer takes its name – the latest Toyota aims to inject some sparkle into the straight-laced line-up. And it’s not just the driving dynamics that hark back to its most famous models, the styling takes its cues from the past, too.

Designers placed a very rare 1967 2000GT coupé in the studio when they worked on the GT 86 – and it’s clear the diminutive sixties sports car has influenced the compact proportions of Toyota’s 21st century model.

Yet, there’s also a hint of Lexus LFA supercar about the front end, while the wide-spaced exhaust pipes and muscular styling add to the car’s considerable kerb appeal.

The cabin feels small, but a big glass area means you don’t feel hemmed in, and visibility is good. A low-mounted seat places you in a traditional sports car driving position, while the large rev counter takes pride of place directly ahead of you.

The rear seats are tiny, but no less practical than the TT’s. In an effort to highlight the kind of driver expected to buy the GT 86, Toyota claims that with the bench folded you can carry a set of tyres and rims in the boot for a track day.

Less focused buyers may be disappointed by the cabin’s old-fashioned design and the cheap feel of some plastics. Still, the dash is well thought out and feels solidly constructed.

When it came to delivering a stunning driving experience, Toyota had three key design parameters – rear-wheel drive, no turbocharging and ordinary tyres. Not relying on performance rubber to achieve grip means the GT 86 has 17-inch wheels and the same eco-friendly, low rolling resistance tyres as a Prius. As a result, on all but the roughest of city roads, the ride is surprisingly comfortable.

Yet, this hasn’t detracted from the car’s abilities on a twisty road. Body control is superb and the electric power-steering fast. Extensive weight saving means the GT 86 tips the scales at just 1,240kg, while a low centre of gravity and well balanced weight distribution add to its dynamic poise. But it’s the rear-wheel-drive layout that creates the real magic.

You can certainly feel the extra agility and the purity of the responses. Lots of modern performance cars are capable, but offer little engagement at safe road speeds. However, in the GT 86 you can feel the limit of grip arriving, and with the stability system disengaged you can use the power to gently let the rear tyres surrender before balancing the car with the steering and throttle. The engine itself is packed with character. Its boxer configuration will be familiar to Subaru fans, but Toyota has added its direct injection technology.

With 197bhp, it’s more powerful than the TT, but a modest 205Nm means it trails the turbo Audi for torque. Still, rear-drive traction and its low weight mean the GT 86 is a fraction faster in the 0-60mph sprint, with a time of 7.5 seconds. At very low revs it’s a little flat, but hit 4,000rpm and the boxer takes on a manic persona, eagerly spinning to the red line.

Throttle response is good as well, and while the engine thrums away each time you press the accelerator, on the motorway the Toyota is unobtrusive and surprisingly refined for a focused sports car.

Costing £24,995 with a decent standard equipment tally, the GT 86 has plenty of real world appeal. So by blending value and everyday usability with an engaging chassis, has Toyota got a winning sports car again?

Chart position: 1Why? With its compact dimensions, light weight and agile chassis, the GT 86 is a back-to-basics affordable driver’s car that looks good and handles even better.