Will power advantage be decisive for muscular Z-car? 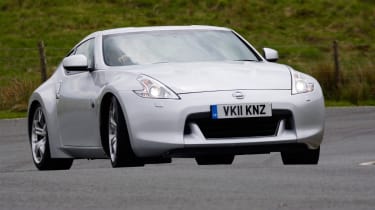 Like Toyota, Nissan has a sports car pedigree it can be proud of. The 370Z follows the same template as the 350Z it replaced, and both take inspiration from the famous 1969 240Z. With its long bonnet, shallow side windows, power bulges and stubby rear end, the classic Z-car look is clear to see in the latest model, and it helps the 370Z stand out from the crowd. But while the GT 86’s classic inspiration extends to being small and light, the 370Z’s doesn’t. It’s only 10mm longer than the Toyota, but with a 20mm shorter wheelbase, bigger overhangs and 30mm higher roof line, it looks cumbersome in comparison. Inside, a high transmission tunnel and instruments stacked in a pod mounted to the steering column help create a driver-focused feel. Headroom is better than in the Toyota, but the wheel is only height adjustable, while rear visibility isn’t great and space is a little tight. Even more disappointingly, given that the Nissan is the most expensive car in the test, the cabin plastics look and feel cheap compared to the Audi. However, the 370Z’s price premium doesn’t seem so outrageous when you take a look under the bonnet. Up against its four-cylinder rivals, the 326bhp 3.7-litre V6 engine delivers 129bhp more than the GT 86 and more than double the power output of the Audi. Not only that, the 363Nm torque output is the biggest here by some margin. Even taking into account its considerable kerbweight, it’s no surprise that the Nissan was the fastest car of our trio at the test track. Unfortunately, while there’s a small sweet spot around 3,000rpm, where the exhaust note is fairly tuneful, elsewhere the character of the engine takes the edge off performance. The V6 is strained at high revs, disappointingly unrefined and noisy. The automatic gearshift on the car in our pictures suffers from a slow shift, while the manual version is clunky, too. Worse still, with the poorest fuel consumption of the trio and emissions of 248g/km, you’ll also pay the price at the pumps and in your tax bill. But it’s the fact that the 370Z falls short in corners that will trouble driving enthusiasts. The weighty steering is positive and the 370Z turns in well, but once into the bend the Nissan’s composure falls apart. The chassis struggles to keep the Z’s 1,496kg weight under control and there’s lots of body movement. The suspension can’t cope with bumpy surfaces, which has a dire impact on traction and grip. Even in less extreme driving situations, the Nissan troubles its traction control far more than its rivals, while an unsettled ride and excessive road noise ruin cruising comfort. Neither as relaxed nor as enjoyable as either of its rivals, aside from its extra power, it’s very hard to see how Nissan can justify its near-£30,000 price tag in this company. Especially as it’s the least practical car, has the worst residual values and the highest running costs.

Chart position: 3 Why? A traditional rear-wheel- drive muscle car, the 370Z has a lot more power than the Toyota, but it’s heavier and has a heftier price tag. Is it worth the extra outlay?