It’s the fastest, most expensive Continental ever – and it’s EVEN dual-fuel! We give our verdict 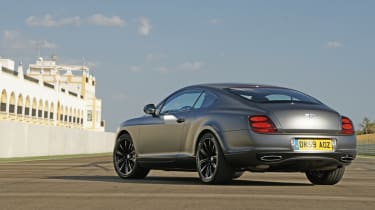 Anyone thinking that Bentley has applied Ferrari’s Scuderia approach to the Continental should reconsider. The Supersports may have lost weight and gained power, but it’s still a big, refined, luxury coupé in the company’s finest tradition. That may disappoint those who are looking for a hardcore hypercar, but by being tauter, more responsive and downright faster than the Speed, it adds more driver appeal without taking away any of the base model’s allure.

Meet the fastest, most powerful and driver-focused Bentley in history. The Continental range’s sensational new Supersports flagship seeks to take the marque’s performance to even greater heights.

With a list of upgrades that should get any enthusiast’s pulse racing, the Supersports boasts a 621bhp 6.0-litre W12, rear-biased 4x4 system, quickshift gearbox and uprated suspension. Its sporty cabin sees the rear seats removed and the fronts replaced with lightweight bucket items. New 20-inch alloy rims and carbon brakes complete a programme that reduces the car’s bulk by 110kg – although, at 2,240kg, it’s still pretty hefty.

And, in a further efficiency bid, the Supersports is the first FlexFuel Bentley, which means it can run on either petrol or E85 bioethanol, or both. This approach, coupled with more radical developments, will be applied to the rest of the line-up over the next few years.

Priced at £163,400, the new car costs £22,100 more than the excellent 602bhp Speed. But is it worth the extra? Well, it certainly looks a million dollars. All exterior chrome has been given a smoked-steel finish, the rear is slightly flared to hide a wider track and neat bonnet vents feed more air to the twin turbos. Together with larger exhaust pipes, those new 10-spoke alloys and a lowered stance, it’s subtly muscular.

If you want to stand out even further, you can choose one of two new exterior matt colours. There’s Light Grey Satin and the Dark Grey Satin shown here, although at a staggering £18,890 it’s an expensive option!

Inside, the first thing you notice is the way the hide-trimmed carbon seats clamp you in place. New diamond-quilted Alcantara trim complements the hand-crafted leather to hint at a more sporting intent. The lack of rear seats – replaced by a load area separated by a carbon fibre beam – underlines this.

Fire up the big twin-turbo W12 and it settles into a quiet hum. The ride does seem a little stiffer, but at low speed the Supersports still feels every inch a luxurious, refined Bentley. Even using the throttle gently, it’s possible to travel at great pace thanks to the W12’s 800Nm of torque, which arrives at a mere 1,700rpm. Flatten the accelerator and the car surges forward in huge leaps, shrinking distance with incredible ease and feeling even more responsive than the Speed.

Acceleration is crushing, with 0-60mph taking 3.7 seconds and 0-100mph arriving in only 8.9 seconds. Top speed is an awesome 204mph. Changes from the paddleshift automatic box are swifter, too, punctuated by an appropriate exhaust rumble – but although there’s more engine noise, there’s not as much roar from the mighty W12 as you’d hope.

The carbon brakes are deeply impressive as well, even if the pedal doesn’t feel particularly firm. And as soon as you turn into a corner you can enjoy the extra tautness and agility that the new suspension set-up offers. For such a large car, the Bentley is remarkably wieldy on tight, twisty roads: the rear-biased four-wheel-drive system helps here, allowing additional throttle adjustability. Yet the Supersports is at its best on sweeping corners: it really flows, gripping hard and showing great poise and traction.

Despite all the changes, the ultimate Conti still rides beautifully and cossets occupants just as well as the Speed. And while Bentley does not describe the car as a GT – without four seats, it can’t be, says the firm – the model is still a superb long-distance tourer. For most buyers, the Speed offers more than enough pace. But for those lucky enough to have the funds, the Supersports is a desirable addition that might prove too hard to resist.