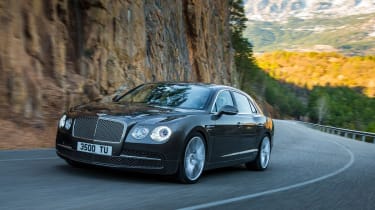 Bentley never anticipated the success that the original Flying Spur would find in China. When it was launched back in 2005 they didn't even consider the Chinese market, but in recent years it's become a runaway success. The extensive revisions have certainly sharpened it up – even if they come with a £10,000 price rise – but it's hard to see it being of anything more than minority interest to British buyers.

There were 125 sales of the Bentley Continental Flying Spur in the UK last year – and nearly 10 times that number in China. With this new version, Bentley is hoping for even more export success, which is why we were flown all the way to Beijing to test it.

Although every exterior panel is new, the Continental Flying Spur still shares its predecessor's mechanical underpinnings – and it's 6.0-litre twin-turbocharged W12 engine. But the Flying Spur is faster, lighter, more economical – and vastly better looking than before, with a new front end to distinguish it from its Continental GT sister and a new muscular shoulder line at the back.

Power has risen from 552bhp to 616bhp, giving the Flying Spur the combination of a 4.3-sec 0-60mph time and a claimed 200mph top speed. That means it's the fastest four-door that Bentley has ever produced, and there's the near-certainty of an even quicker ‘Speed' version to follow later.

Buyers looking for Bentley's new 4.0-litre V8 engine, as seen in the Continental GT and GTC will have to wait. We're told it will be ‘at least a year' before it makes an appearance.

As before, the 6.0-litre W12 is a remarkable engine, albeit one that only those with the very deepest pockets will be able to run. Performance is every bit as brutal as the official figures suggest, with the engine's enormous 800 Nm of torque (available from just 2000 rpm) giving it enormous straight-line urge. It has four-wheel drive and a new eight-speed automatic gearbox, which works well when left to its own devices, but suffers from an irritating delay when you try to change gears using the paddles behind the steering wheel.

Bentley has engineered a new full-length acoustic shield that sits under the Flying Spur's floor to cut down on road noise. The company claims the Spur is now one of the quietest cars in the world at cruising speeds, and it was whisper quiet at a fast motorway pace. But this near-silence demonstrates the engine's lack of a compelling soundtrack, the W12 lacking the aural fire of the new V8.

Suspension settings have been changed substantially, with the new Flying Spur's set-up far more pliant than the original. Springs, bushes and anti-roll bars are all softer, while the active electronically controlled dampers are now quicker to react, and capable of becoming stiffer when called upon to control the chassis. Having experienced the car on China's often-horrendous road surfaces it's easy to see why the decision was made, our test car never lost its composure, despite wearing optional 21-inch wheels (19-inch are standard).

You'd expect the softer settings to take the dynamic edge off the driving experience, but the new Flying Spur doesn't feel any less sharp than the original. You're never in any doubt as to the car's considerable size and bulk – despite a 50kg weight saving over the old version, it still tips the scales at a sizeable 2475kg. But grip levels are good and, although ultimately the Spur's front end runs wide, it can be hustled along a twisty road at an impressive pace. It's happiest when cruising, though.

Perhaps the biggest question posed by the new Spur is why Bentley didn't treat the Continental and GTC to a similarly comprehensive makeover when it refreshed them last year. Next to it, its two-door siblings look a bit old-fashioned.