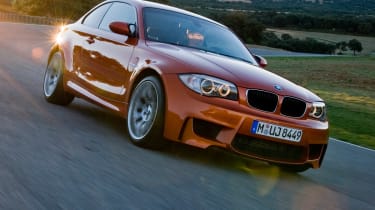 The 1 Series M Coupe is the closest rival to the Audi RS3, but while the Audi has four-wheel drive, the BMW sends power to the rear tyres in true M car style. Compact dimensions are compensated for with flared wheelarches, a wider track and a pumped-up bodykit. Power comes from a 3.0-litre straight-six turbocharged engine with 335bhp and 450Nm of torque, so performance is ballistic, but accessible from low rpm. However the M Coupe is a rare sight on British roads, as only 450 were sold in the UK but the similarly powerful M135i is cheaper and nearly as fast.

Any car that wears the hallowed M badge has to be something special to drive – and the 1 Series M Coupe doesn’t disappoint. With more torque than the V8-powered M3, the engine produces enormous thrust whatever the revs, takes just 4.9 seconds from 0-62mph and produces a magnificent noise in the process. High-performance brakes and a sport differential are taken from the M3 – the latter shuffles power between the rear wheel to maximise grip and allow long, controllable tail slides when you break traction. The short wheelbase and wide tyres mean it feels agile but grippy in the bends, although the suspension might be too firm for some. The fact that only a manual gearbox is offered proves this is a car aimed very much at driving enthusiasts.

One of the benefits of a turbocharged engine is improved fuel consumption – so a combined figure of 29.4mpg is respectable for a car this fast, although the Audi RS3 trumps it with 31mpg. The BMW comes with fuel-saving measures such as brake energy regeneration, but does without stop-start. The bills don’t stop at the pumps either, as BMW dealers are among the most expensive when it comes to servicing. When you consider it’s around £13,000 cheaper to buy than the M3 though it starts to look like better value, and residuals will be rock-solid thanks to its rarity.

As with all M cars, the formula for the BMW 1 Series M Coupe is simple – take a standard 1 Series Coupe and make it look as aggressive as possible. The car sits lower to the tarmac and gets a wider track, while muscular flared wheelarches wrap around 19-inch lightweight alloys. Three paint finishes are offered – Alpine White, Black Sapphire and Valencia Orange, the door mirrors are borrowed from the M3 and four protruding tailpipes at the rear finish off the look. Inside, sports seats are fitted as standard, while leather, Alcantara and contrast stitching make it feel more special than the lesser models in the 1 Series Coupe range.

Despite having such a compact footprint on the road, BMW has made the most of the interior space on offer. The boot space is a surprisingly large 370 litres – that’s 10 litres more than the five-door hatchback with the rear seats in place – while the rear seats are big enough for two average adults. There are plenty of cubby holes dotted around too, although none are particularly large. The exhaust sounds glorious on full throttle, but luckily there is no noticeable drone at motorway speeds and refinement is surprisingly good if you can stand the rather stiff suspension.

When the standard 1 Series Coupe was tested by Euro NCAP it earned the full-five stars, so the same applies to the M Coupe. It gets eights airbags and a whole host of electronic systems to prevent accidents, including ABS and Electronic Brakeforce Distribution, plus parking sensors at the front and rear. As for reliability, BMW has an excellent reputation for building robust cars, and there have been no recalls for this particular model. Be mindful to stick to the recommended servicing intervals though as the high-performance components will need careful maintenance.