Despite its controversial looks the BMW 1-Series has a loyal following, thanks to engaging driving dynamics and premium appeal 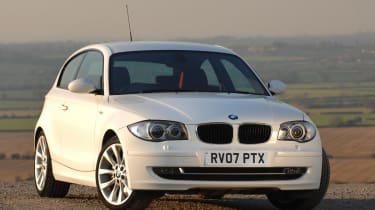 Aimed at the Volkswagen Golf, the rear-wheel drive BMW 1-series is a unique offering in the premium hatchback class... Not only does its upmarket badge offer huge appeal, but its driver focused chassis delivers a thrilling drive. It's not terribly spacious inside, but it is very well made. What's more BMW's economical Efficient Dynamics models return impressive fuel economy.

STYLING THE BMW 1-Series’ bold styling proved controversial at its launch in 2005, but that didn't put off buyers. With its dynamic mix of creases, curves and straight lines, the BMW 1-Series manages to turn heads, even though it has become a familiar fixture on UK roads. The original car was only available as a five-door hatchback, but this was soon joined by a three-door version, plus stylish Coupe and Convertible versions. Racy M-Sport versions benefit from a stylish bodykit, larger alloy wheels and lowered suspension.

INTERIOR DESPITE its entry-level status the 1-Series’s hatchback cabin shares the same quality look and feel as the brand’s more expensive cars. Rock solid build and soft touch materials are a class apart from mainstream rivals, while switches have precise action. Low slung driving position gives sporty feel and controls are perfectly placed. All models get cloth trim for the seats, plus eye-catching silver finish inserts for the dashboard, doors and centre console.

DRIVING AND PERFORMANCE KEEN drivers will love the BMW 1-Series’s sharp driving dynamics. With its traditional rear-wheel drive chassis and meaty controls, the BMW serves-up plenty of thrills through corners. Meaty steering, a slick gearshift and progressive brakes add to the car’s appeal. All versions have a firm ride, particularly in stiffly sprung M-Sport guise. Entry-level 116i models feel a little breathless, while the fire-breathing 302bhp 3.0-litre straight-six is only available in the Coupe. BMW's punchy and fuel-efficient diesels are the pick of the bunch - we particularly like the BMW 120d SE.

PRACTICALITY Climb into the back of a 1-Series and you’ll discover its Achilles heel – a cramped interior. Head and legroom are in short supply, while the high transmission tunnel further eats into the available space. There’s also precious little stowage space in the cabin. Making matters worse is the small 330-litre load bay on hatchback models – Coupe variants benefit from a more generous 370-litre capacity. Folding the rear bench flat improves matters, but the 1-Series trails both premium and mainstream rivals.

RELIABILITY AND SAFETY It’s clear the compact 1-Series benefits from BMW’s big car knowledge when it comes to safety. A strong shell, six airbags and standard fit ESP all helped the hatchback version secure a five-star score in the tough EuroNCAP tests. On the whole the 1-Series upholds BMW’s reputation for building dependable and robust cars. However, some owners have reported one or two electrical glitches, and the car finished over 20 places behind the Audi A3 in the 2010 Driver Power survey.