Facelift aims to keep premium hatch at the top of the class. Will it succeed? 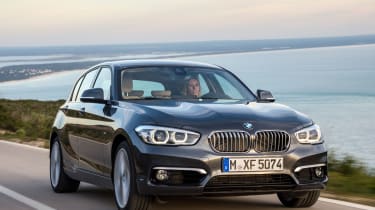 The appeal of entry-level BMW ownership has been widened with the arrival of the facelifted 1 Series. It’s easier on the eye, thus keeping style-conscious buyers happy, while new fuel-sipping diesels will ensure company car buyers won’t be tempted by rivals from Audi or Mercedes. Passenger space remains an issue, but compact premium packages don’t come much better than this.

Few premium cars drip with success quite like the 1 Series, which has sold more than two million examples worldwide in only 10 years on the market. It’s long been a cornerstone of BMW’s market dominance, and to ensure the hatchback remains fresh and on top of its game, it’s been given a mid-life refresh to keep the Audi A3 and Mercedes A-Class honest.

One thing that’s always divided opinion is the way the 1 Series looks. How a manufacturer can conjure up the technical prowess to create something as radical as the i8 and then build something as frumpy as the 1 Series has long been debated, but this facelifted model has attempted to address that.

From the front BMW has worked on sculpting a more crowd-pleasing face for the hatch, which from certain angles now has the look of a miniature 3 Series. A sharper front bumper, tauter lines and crisper LED headlamps inject a greater sense of quality and attention to detail. 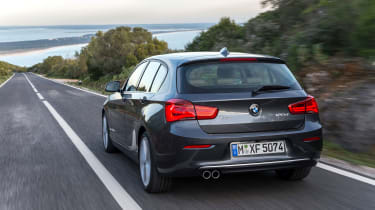 So far so good, but move round the back and BMW has began to undo its own fine work. Whereas previously the front end provided the ammunition for criticism, it’s now the rear that’ll raise a few questions. Again there is a reshaped bumper, but the i8-inspired tail-lights look too big and are bulky enough to upset the car’s proportions.

Yet the more time you spend in the 1 Series’ company, the less offensive it becomes. As before, it’s available as a three or five-door, with the more practical offering currently outselling its counterpart by nearly three to one. There are also five new diesels – most interesting of which is the 115bhp 1.5-litre three-cylinder 116d – as well as four petrol engines.

We got our hands on the predicted top seller first – the 187bhp 120d – equipped with the optional but costly eight-speed automatic gearbox and xDrive all-wheel-drive system. Go for the standard six-speed manual and rear-wheel-drive set-up, and you’ll save more than £3,000. 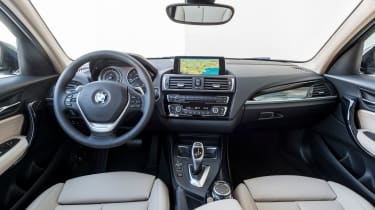 There are no dramatic changes from the pre-facelift model behind the wheel, so the 1 Series still drives with the same composure and finesse as before. Tweaks to the engine’s internals have sharpened throttle response slightly, with 400Nm of torque ushering the 120d from 0-62mph in a brisk 6.8 seconds.

The 2.0-litre engine is about as muted as a diesel can get, helped by longer gearing in the auto which also means at 70mph you’re barely tickling 2,000rpm. Despite its hot hatch performance figures, the 120d xDrive also claims 62.8mpg and 119g/km. Fleet buyers, however, will be more interested in the 118d, which now creeps below the magic 100g/km emissions mark.

On the move there’s masses of traction from the xDrive system, and the perfect 50:50 front-to-rear weight distribution helps keep everything controlled at speed. Optional adaptive dampers serve up Eco, Comfort and Sport driving modes, but we found Comfort to offer the best compromise in terms of body control and acceleration – meaning that’s an option box best left unticked. You don’t need to extend the engine beyond 3,500rpm, as you can use the vast reserves of torque to shepherd you along at pace. 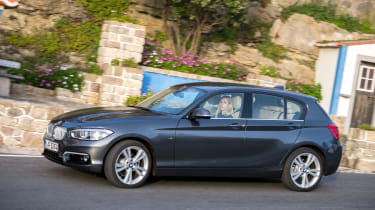 What the facelift doesn’t bring to the 1 Series, however, is any major updates inside. In comparison to an A3 Sportback, the BMW lacks a certain sparkle. Everything is solid and well put together, but it’s just a little too bland up front.

Another drawback is rear space. Narrow door openings restrict access, and while headroom is generous there’s only just enough legroom for adults. The elevated middle seat means sitting three abreast is a no go, too – unlike in the likes of the A3.