Has a raft of updates helped to keep the family-friendly BMW 2 Series Active Tourer MPV relevant? 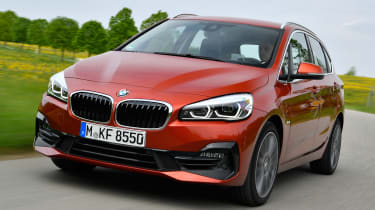 If you’re in the market for an MPV, it’s probably because your current lifestyle dictates one rather than your deep desire to own one. The fact the 2 Series Active Tourer has a BMW badge on the front is likely to soften the blow for many buyers; it sprinkles a bit of dynamism into a segment that feels a bit lifeless, but the revamped German model isn’t the most spacious car in its class.

The 2 Series Active Tourer felt about as welcome to BMW’s model range as Donald Trump was to politics when it was launched back in 2014. A front-wheel-drive MPV that placed practicality over performance and headroom over handling was a dramatic shift for a brand that prided itself on building the ‘ultimate driving machine’.

But BMW had identified an untapped market and over the past four years the model has proven a significant success, clocking up more than 284,000 sales worldwide. And ahead of the all-new Mercedes B-Class arriving next year, BMW has decided now’s the time for a light nip and tuck for the Active Tourer.

It’s far from a dramatic makeover; in fact, on initial inspection it’s difficult to tell what has actually changed. Park old and new side by side and you’ll spot a new kidney grille, slightly reshaped front bumper and headlights. Adaptive LED headlamps are also now available. 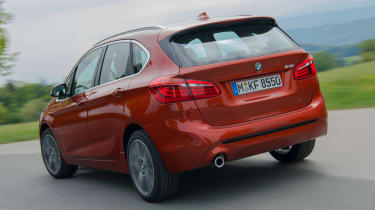 If you’re expecting something more dramatic inside, think again; there’s a new touchscreen perched on the dash, a fresh pair of dials and some new materials – and that’s your lot.

The only powertrain tweaks on the 218i Active Tourer we’re driving amount to the introduction of a new seven-speed dual-clutch automatic gearbox. The 1.5-litre three-cylinder turbo engine it’s paired with remains unchanged, and develops 138bhp and 220Nm of torque. BMW says that’s good for 46.7mpg and CO2 emissions of 132g/km.

Like the design, little has changed when it comes to how the updated Active Tourer drives. As far as MPVs are concerned, it’s the more entertaining of the bunch, but pretty forgettable by all accounts. You sit high up, surrounded by tall panes of glass on all sides, with lots of adjustment in the driver’s seat.

The three-cylinder engine is eager and serves up acceptable performance, sprinting from 0-62mph in 9.3 seconds, while changes from the new seven-speed auto are smooth, but can feel a bit laboured shifting down when you ask for a squirt of acceleration. On the motorway the box’s extra cog helps the engine to fade into the background, with wind noise and vibrations both well isolated from the cabin.

Through corners the car resists body roll pretty well for a model with such dumpy proportions, but the steering is rather vague and inconsistent in feel. 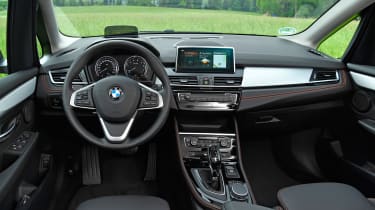 But is any of this likely to matter to potential buyers? Probably not. The amount of luggage it can swallow, how easy it is to hook up your smartphone and the number of child seats you can fit are by far more important matters to potential Active Tourer customers.

In most of these areas the BMW scores reasonably well. The 468-litre boot is 120 litres down on the VW Golf SV’s, but it’s flat, with some handy storage beneath the floor. Dropping the rear seats frees up 1,510 litres of space, while three ISOFIX points compensate slightly.

Like every BMW, the Active Tourer has the brand’s intuitive iDrive infotainment system. The updated set-up also allows inputs via touch on the new 6.5-inch display, but a USB port beneath the armrest allows access to Apple CarPlay or Android Auto if needed.