The BMW M2 Competition gets the engine from the M4 and a chassis upgrade, but what's it like to drive? 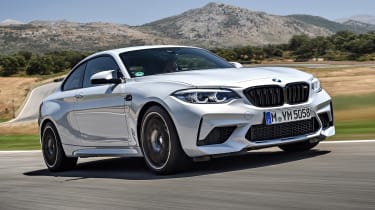 This Competition version is the car the M2 should always have been. The engine transplant has helped give the newcomer true M car character, while the subtle chassis tweaks have added a welcome dose of control to the BMW’s already agile handling. Not only is the M2 Competition a fast and fun driver-focused coupe, it’s arguably the pick of the whole M car line-up.

On the surface, the BMW M2 Competition looks like a lightly fettled version of the standard car. Yet while previous tweaked versions of the German brand’s high performance M cars have been treated to little more than a small power increase and some minor modifications, the new M2 has benefitted from a root and branch overhaul.

The biggest change is found under the bonnet, where the M2’s old turbocharged straight-six, which could trace its roots back to the unit in the fairly run-of-the-mill M135i, has been replaced by the full-fat, BMW Motorsport developed engine from the M4.

While it has the same capacity as before, the new motor is a far more focused piece of kit, featuring twin turbochargers, a bespoke six-into-one exhaust system, and a heavy-duty cooling set-up. The results are startling, with power rising from 365bhp to 404bhp, and torque swelling by 50Nm to 550Nm. 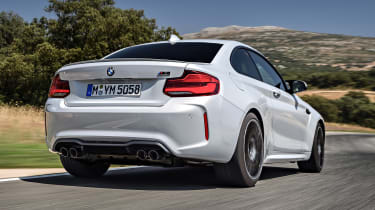 Of course, power is nothing without control, so the engineers have upgraded the chassis to match. For starters, the standard M2 bodyshell has been stiffened with a carbon fibre strut and aluminium bulkhead braces, while the rear suspension gets stronger ball joints. Curiously, the rest of the suspension calibration has been left untouched, while there’s still no adaptive damper option.

Elsewhere, the stability control system has been recalibrated, as has the electronically controlled limited-slip differential. The brake system now features larger discs all round (380mm at the front and 370mm at the rear), too. As before, there’s a choice of six-speed manual and seven-speed twin-clutch gearboxes.

It’s likely that only eagle-eyed fans will spot the external changes to the M2 Competition, which run to a wider double kidney grille and a reprofiled front bumper that includes larger air-intakes for the improved cooling system. There are also plenty of gloss black accents, while the new 19-inch alloys are also available in the same colour. 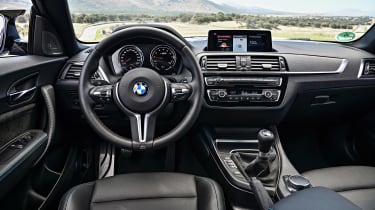 Inside, the changes are equally low key, with the most obvious change being the adoption of a pair of heavily bolstered front seats that feature slightly gaudy illuminated ‘M2’ logos in the backrest. Other than that it’s standard M2, which means a top notch finished and driver-focused layout.

Thumb the bright red starter button (a new addition for the Competition) and the twin-turbo straight-six fires into life before quickly settling to a bassy mechanical idle. Engage first gear using the short throw manual gearbox and as you move away the extra muscle is easy to detect. With peak torque arriving at 2,350rpm, the M2 accelerates with a relentless energy, despite weighing 55kg more than the original. Remember, this is a replacement for the M2 rather than an extra rung in the current range.

The benchmark 0-62mph sprint is dealt with in 4.4 seconds (4.2 seconds with the DCT auto) and it feels every bit as quick as the numbers suggest. Yet it’s the way the Competition delivers its performance that’s really exciting. Where the old car did its best work in the mid-ranges, the latest model inherits the larger M4’s appetite for hard work, seemingly getting stronger as it races around to the 7,500rpm redline. It’s accompanied by a snarling soundtrack that’s more natural than its artificially enhanced big brother’s, while selecting Sport or Sport+ modes adds welcome sharpness to an already responsive motor.

Slow for a corner and the bigger brakes deliver powerful and fade-free stopping, while a rev-match feature automatically blips the throttle on downshifts. Turning in to the bend reveals meaty and direct steering and plenty of front-end grip, helping you place the M2 with confidence. 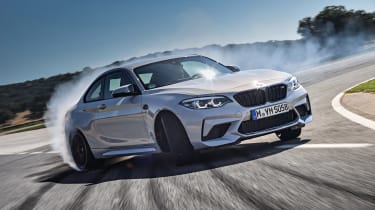 The changes to the rear suspension and differential mean you can get be bolder with the throttle to catapult you out of the corner with real intent, too. Of course with so much power and torque going through the rear wheels, the M2 can easily be provoked into showboating oversteer when all the electronic driver aids are switched off, but the suspension tweaks mean there’s more control than before. Bumpy surfaces can still cause the short wheelbase and wide-tracked BMW to squirm around a little, but the rest of the time you can cover ground at an alarming rate.

Take it a little easier and the M2 is as straightforward to live with as ever. It’s not quite as relaxed as an Audi RS 3 – there’s and underlying firmness to the ride and the exhaust note can get boomy and certain speeds – but the BMW is otherwise refined, capable and as practical as a compact two-door coupe gets.