Sun hasn’t shone on the BMW 240i Convertible since it joined our fleet, but it’s shaping up to be a summer sizzler

Practicality issues aside, I’m getting along brilliantly with the M240i. I love the characterful engine, and it’s even proving relatively efficient. And when (if) the sun comes out, the Convertible will come even further into its own – of that I’m sure.

In theory, taking delivery of a shiny new Sapphire Black BMW M240i Convertible should have been an event to relish and a day to delight.

But that’s not quite how things turned out, and I have the Great British Winter to thank – because the day the open-top 2 Series arrived it was minus one outside and, in the month or so and 2,120 miles since, I’ve had the roof down just twice.

No matter, because if the vagaries of the weather have conspired against me enjoying the car with the roof down (it takes 20 seconds to lower electrically at speeds of up to 30mph), this is still a nice machine to drive. In fact, it feels a lot like a regular coupe with the canvas up, with only a touch of extra wind noise from the hood. 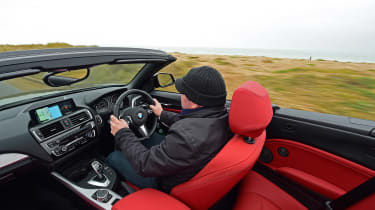 Power for the M240i comes from a rousing 335bhp 3.0-litre straight-six engine, but thanks to a twin-scroll turbo there’s also 500Nm of torque. Both figures represent slight increases over the old M235i, which the M240i has now replaced. Our car also has BMW’s excellent eight-speed auto box with shift paddles on the wheel; it cuts the 0-62mph time to just 4.7 seconds and boosts economy to a theoretical 38.2mpg.

Not that I’ve got anywhere near that efficiency figure yet. My best is 32.1mpg, while in day-to-day use the average is just under 30mpg, which is still respectable.

Our £40,465 automatic model is fairly well loaded. Options on our car include the Professional Media Package (£900) and Adaptive M Sport Suspension (£515), plus numerous other extras including heated front seats, which are a big plus at this time of year – especially on the few occasions I’ve been able to get the roof down. 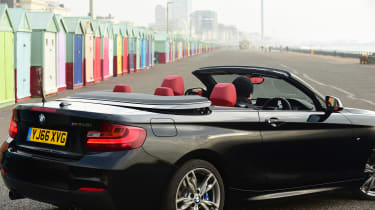 On the move the M240i feels as quick as it sounds on paper, and it emits a subtle but meaningful burble from its exhaust on start-up. The suspension defaults to Comfort every time the car is fired up, but I tend to engage the adaptive dampers’ Sport mode every time I climb aboard, and certainly if anything approaching a decent road appears in the windscreen.

That’s because I find the suspension a little bit too soft in Comfort, with too much unwanted movement at the back. In the Sport or Sport Plus settings, the rear end tightens up nicely, while the throttle map and the gearbox also become snappier.

At the other extreme there’s the Eco Pro mode, selected by the Drive Performance Control switch. It lets you monitor how much fuel you’re not burning and how many extra miles this is netting you on the move – sensible and conscientious.

But to be honest, the throttle response becomes so dead, and the whole car feels so inert, that I simply don’t use this mode. Ever. The 2 Series does wear an M badge on its tail and along its flanks, after all, and even though it’s not a full-blown M car, it still feels properly sporting to drive.

So far I’m very much enjoying the M240i Convertible’s company, even though the weather has been doing its best to ruin its charms as an open-top car. I’ve only noticed a couple of issues with it, the most obvious of which is the size of the boot. Thanks to the electric roof stowage, this is small in the first place, but becomes tighter still with the £260 optional wind deflector stowed in the luggage bay.

Secondly, the phone holder in the centre console won’t accept my iPhone 6 because, again, it’s too small – which is a bit silly.