The M235i Convertible has got more power these days. We test the M240i Convertible to see if that's a good thing 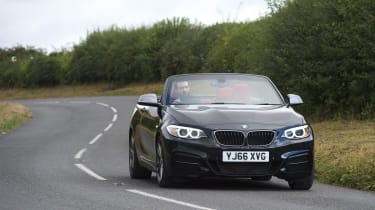 Just listening to the engine is enough to make you want a go in the BMW M240i Convertible. The smooth 6cyl petrol is a fantastic unit with loads of power and a beguiling soundtrack. The open-top BMW is great to drive too, with a sporty feel despite the extra weight it gains over the coupe. Updates to the powertrain haven't changed too much compared to the old 235i, but some new tech inside means you get more for your money.

BMW updated its 2 Series range this summer, with some changes to the engines and specifications across the line-up. There were a few naming tweaks too, with the M235i becoming the M240i, to reflect a small power boost. We've driven the Convertible version in the UK and it’s the fastest drop-top in the range as there's no M2 Convertible.

Fast is certainly is, thanks to a 3.0-litre twin-scroll turbo six-cylinder engine with 335bhp and 500Nm of torque. That means it'll go from 0-62mph in just 4.7 seconds with the automatic gearbox fitted, and up to a top speed of 155mph. Those figures are improved slightly over the M235i Convertible, which had 321bhp and managed the sprint in five seconds flat.

The difference on the road is minimal, although the extra 50Nm of torque does make the engine feel more eager at lower revs. Like before, it's a superb unit - smooth and powerful but also with a dual personality. It's perfectly happy to blast down the road at low revs, but also likes to be revved harder if the mood takes you. The eight-speed automatic gearbox on our test car is pretty good, with a nice balance of smooth and fast shifts depending on the driving situation. 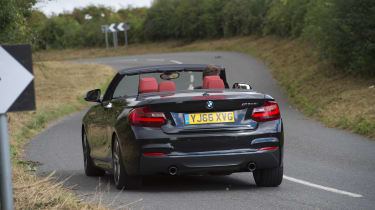 It sounds brilliant and that's where the Convertible comes into its own compared to the coupe as you can hear that growl even more clearly. The extra 145kg of strengthening needed for the soft-top model means it doesn't feel as agile, but the difference is small and this car is still good fun on the right road. Slightly numb steering aside, the BMW is great to drive, with just a little body roll and an enjoyable rear-wheel drive chassis. It's undoubtedly more fun than the incredibly quick, but lifeless, Audi S3 Convertible.

The adaptive M Sport suspension means you can change from Comfort into a harder Sport profile, although the difference between the modes is mainly felt in the gearbox, which is more aggressive and holds onto gears longer in the Sport modes. The suspension remains fairly compliant in the UK, and while you'll still feel some lumps and bumps the M240i does feel planted on the road. 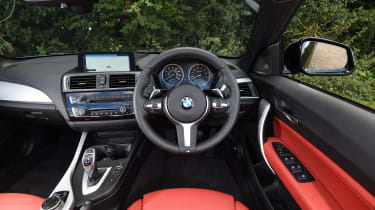 Like many of BMW's cars, the low driving position is very comfortable and helps make the M240i feel even more sporty. Even small things like the simple design of the dials makes the the car feel like upmarket product, especially in combination with the leather all over the cabin. Our test car featured red leather, which is a strong look in a convertible, but there were no complaints about the quality. Only some cheap plastics around the cabin bring things down to earth a little.

The soft-top roof folds down at the touch of a button in the cabin and while it's a little slow, it does hide away neatly behind the rear seats. While there's technically room for four in the car, those in the back seats will come out with sore legs after a long journey. With a tall driver rear legroom is tiny, so it's best left for short trips. There's a wind deflector that can be fitted over the top, which helps keep buffeting down - although even at speed most of the wind is kept out of the cabin.

With the roof up, the M240i it's understandably less hushed in terms of wind and road noise than the coupe version, but it's still fine for holding a conversation with a passenger.

BMW's latest infotainment system is fitted, and sat-nav is standard. The system is among the best around, with an easy-to-use scroll wheel for selecting menu options rather than a fiddly touchscreen. It looks sharper than before too, thanks to some new graphics.

Another area of improvement over the old M235i is efficiency, as the new model manages 38.2mpg with the eight-speed automatic gearbox fitted. That’s 2.4mpg better than before, and emissions of 169g/km mean it's £20 cheaper a year to tax than the 235i was - and there will be company car tax savings too. 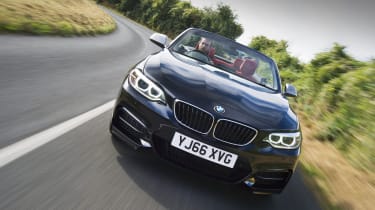 It's the price that will put the cash-conscious buyer off, rather than the economy. It's cheaper than the £40,670 Audi S3 Cabriolet, but for our money the M240i coupe is better value: it's £3,445 cheaper, better looking and better to drive. If you're dead set on a drop-top, though, you could do a lot worse than the M240i Convertible.