The new 369bhp BMW M340i xDrive is on the way, but we've been for a drive in a prototype version ahead of its arrival 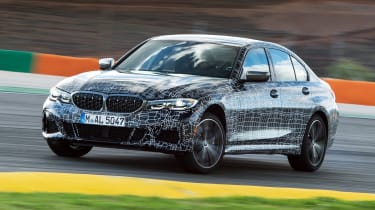 The BMW M340i xDrive has got the potential to be a versatile year-round performance machine in the UK. There are some subtleties to the way it drives and how best to exploit the four-wheel drive system, while the six-cylinder engine sounds sweet, but its appeal lies in its ease of use and exploitable speed. It could be sharper, though.

While the 330i might be the most potent 3 Series on offer from launch, the BMW M340i xDrive is hot on its heels – and we got to sample a pre-production prototype on the Portimao race track.

With a 369bhp 3.0-litre turbocharged straight-six this ‘M car lite’ is actually half a second faster from 0-62mph than the outgoing M3, taking 4.4 seconds. Thank BMW’s M Performance four-wheel drive system for that.

Traction is great and like the new M5 super saloon, the M340i feels like a heavy but nicely balanced rear-drive saloon with the front axle assisting. With 500Nm of torque and the ESC disengaged there’s easily enough punch for the M340i to be coaxed into some lairy behaviour, but it never feels entirely natural due to its four-wheel drive layout. 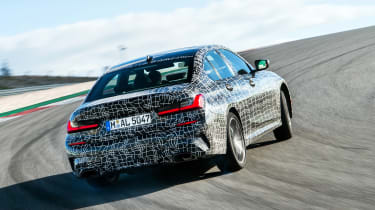 A subtly different approach will yield more wild results but, for speed, slow in and fast out is the best method, relying on the engine’s torque and the xDrive system’s traction.

It doesn’t feel like a track car due to its weight, but we can see the M340i impressing on wintery UK roads with its mix of power, performance and security – plus a six-cylinder engine that sings through it’s twin pipes and emits some characterful pops on the overrun.

The upgraded M Sport brakes proved their worth on track as the M340i is deceptively fast, yet on the super smooth circuit we didn’t really get an opportunity to explore the tweaked adaptive M Sport suspension’s range of ability.

The same steering system almost devoid of feel afflicts this model too, only it’s more apparent and frustrating here given the M340i’s sporting aspirations and removes a layer of connection with the car.

The infotainment is the same as the 320d and 330i models we’ve tried, so works just as well, while it’s as spacious and usable inside despite some racier M Performance touches.

Outside has had similar treatment, and although the car has been officially unveiled, you could still see the gently massaged bodywork underneath our camouflaged prototype’s wrap.