Is the petrol-powered version of the new 3 Series as impressive as its diesel counterpart? 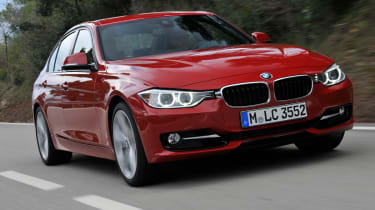 We know the new 3 Series diesel is a fantastic car, and this petrol version is another winner. What the four-cylinder turbo 328i has lost in aural appeal it makes up for with impressive fuel efficiency, low running costs and even greater performance. Minor niggles include wind noise and the fact that you need to splash out on extras for the best handling, but the rest of the package scores full marks.

We’ve already driven the all-new BMW 3 Series and given the 320d diesel a maximum five-star rating. Can the 328i make the same impression?
BMW reckons it will be the best-selling petrol 3 Series, so there’s a lot of responsibility resting on the car’s shoulders. The 328i effectively replaces the old 325i, which was powered by a naturally aspirated 3.0-litre six-cylinder engine and produced 209bhp.
Video: Watch CarBuyer's video review of the new 3 Series
[[{"type":"media","view_mode":"content_narrow","fid":"68815","attributes":{"alt":"","class":"media-image"}}]]
The new model comes with a more efficient 2.0-litre turbocharged four-cylinder, but doesn’t lose out on power thanks to its 239bhp output.
That’s still some way behind the most potent engine in the range – the 302bhp 3.0-litre six-cylinder turbo in the 335i – but with the optional eight-speed automatic transmission, our model still manages to complete the 0-62mph sprint in only 6.1 seconds.

Considering the performance on tap, the 328i claims to be impressively clean and efficient, with 44.8mpg fuel economy and CO2 emissions of only 147g/km.
Throughout our drive on some twisty Spanish B-roads, we had to keep reminding ourselves that this was the 328i, because it behaved like a much more focused sports saloon. It’s slightly bigger but incredibly even lighter than before, and is great fun to drive, feeling precise but comfortable.
Our car was enhanced by variable ratio steering (£350), which aided agility and turn-in to corners. Plus, it came with M Sport Adaptive Dampers (£750), which lower the ride height by 10 millimetres.
With all the extra kit on board, the four-door is simply superb into and out of sharp curves, with the chassis feeling utterly predictable and stable at all times. While the old 3 Series was no slouch, this new model feels much more nimble.
It would be interesting to try a basic ES model without all the bells and whistles to see just how good it is. The bigger 5 Series loses quite a bit of its sharpness when you don’t specify all the extras.
It’s not all good news, though, as there was some unexpected wind noise at motorway speeds. And under hard acceleration, the four-cylinder engine doesn’t sound half as good as the six-cylinder it replaces.
Long-distance comfort is still fantastic thanks to the supple ride, which is sensational for this class. Again, though, it helps if the car has the M Sport Adaptive Dampers fitted – when set to the Comfort mode, they ensure the 3 Series glides over rough roads. Without them, the standard set-up tends to be a little firmer.
Rear passengers are treated to better comfort than before, too, as the car offers an extra 15mm of legroom. The boot has also grown and can now swallow 480 litres of luggage.
BMW has concentrated on increasing value for money in the 3 Series, so basic ES models come with 17-inch wheels, cruise control and keyless go. Completing the range are SE, Sport, Modern and Luxury models. There are lots of options available and they’re now similar to those offered on a 5, 6 or 7 Series; they include Surround View cameras to help parking and also camera-based Collision Warning systems.
Deliveries of the saloon begin in February, and this 328i model is expected to start from around £31,000. It may not have a sporty six-cylinder soundtrack, but it’s still very efficient and brilliant to drive.