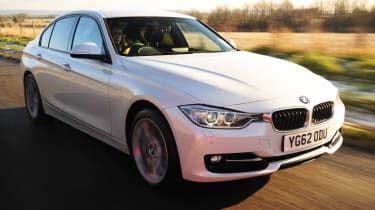 With winter in full swing, it’s hard not to see the appeal of the 3 Series xDrive. The hi-tech four-wheel-drive system turns the BMW into a true all-weather family car. Yet when conditions are good, it drives as brilliantly as any other model in the range. The icing on the cake is that it undercuts the Audi A4 quattro. All we need now is a diesel version.

Jaguar isn’t the only premium brand that’s got a new four-wheel-drive saloon on its books, because BMW has just launched its 3 Series xDrive in the UK.

Customers on the Continent have been able buy all-wheel-drive 3 and 5 Series models for decades, but this is the first time they’ve gone on sale here. The xDrive will initially only be available with a 181bhp 2.0-litre petrol engine.

The electronically controlled transmission normally sends 60 per cent of the drive to the rear and 40 per cent to the front. However, if the system detects any slip, a multi-plate clutch centre differential can send up to 100 per cent of the torque to the axle with the most grip.

In everyday driving, you’d be hard pressed to detect the four-wheel drive working. That means you get the same beautifully balanced, engaging handling that marks out rear-wheel-drive BMWs.

Yet when conditions are slippery, the extra traction is obvious. Where the standard car’s stability control warning light would be flickering wildly, the confidence-inspiring xDrive simply grips hard and powers through the corner.

Elsewhere, it’s standard 3 Series, which means you get the same roomy and beautifully built cabin, useful 480-litre boot and a decent haul of standard equipment, including Bluetooth and dual zone climate control.

Externally, the only clue to the car’s all-wheel-drive underpinnings is a small xDrive badge on the tailgate.