The new BMW 3 GT is the most spacious 3 Series yet, but is it worth the premium over the Touring? 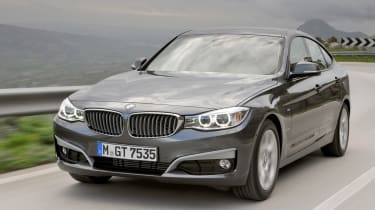 The 3 Series GT does put forward a good case for itself. It’s easily the most spacious and comfortable 3 Series you can buy and there’s not too much of a sacrifice from behind the wheel. Its mix of abilities means that the GT is almost without rivals – though the smaller A5 Sportback gets closest – so its main competition will come from within the range. Buyers looking for a spacious 3 Series do have the option of the Touring, though, and will save themselves around £1,600 in going down that route.

With saloon and estate versions of the BMW 3 Series already on sale, you could be forgiven for wondering what’s the point of the new 3 Series GT hatchback. BMW says it’s supposed to offer the practicality of the Touring with the sporty drive of the saloon, so we got behind the wheel to find out if there’s a place in the range for the GT.

The omens aren’t necessarily good. BMW has tried this before with the 5 Series GT, which was perfectly luxurious, spacious and good to drive but failed to find many fans in the UK. That was partly down to its slightly awkward humpback styling - fortunately to our eyes the 3 GT is a far better example of how it should be done.

The proportions are better this time around; the design seems more cohesive and there are a few GT-exclusive styling touches, like the new air-breathers behind the front wheels, which smooth the airflow down the side of the car. The bumpers and the lights are completely new to the GT, and there’s a smoother bonnet, too.

The styling manages to successfully hide the GT’s increased dimensions, so it comes as a bit of a surprise to learn that it’s a massive 200mm longer, 81mm taller and has a 110mm longer wheelbase than the 3 Series Touring.

As a result, the GT is now the most practical 3 Series you can buy. It has a 520-litre boot, which is 25 litres larger than the Touring, and can carry a maximum of 1,600 litres with the rear seats down. The boot itself is full of practical touches like lashing points, a 12V socket, underfloor storage and an electrically powered tailgate.

Step inside the cabin and it’s clear that the GT is quite a bit different to any other 3 Series. The driving position sits 59mm higher, which gives you a kind of mini-SUV view of the road ahead. Jump in to the back seats and you’re treated to an additional 70mm of legroom, making this feel every bit the match of the larger 5 Series.

There’s a choice of two diesels and three petrols, but we’re driving the predicted best-seller – the 181bhp 2.0-litre 320d. It’s the kind of engine that leaves you wondering why you’d need anything else. Not only is it refined, but it’s also smooth and punchy, boasting a 0-62mph time of 7.9 seconds. Fuel economy of 57.6mpg is seriously impressive, too, as is the CO2 emissions figure of 129g/km.

The 3 Series has always been the most engaging car in its class to drive, so it’s a worry when BMW reveals it has softened up the suspension in the GT to improve comfort. A quick drive is all it takes to reveal the 3 Series hasn’t lost too much of its magic, though – so long as you opt for the three-stage adjustable M Sport dampers (£750).

Yes, there’s a fraction more body roll in comfort mode than the saloon, but select Sport and you still get a really crisp turn-in, combined with better-weighted, communicative steering and an agile chassis. The easiest way to allay any fears about the handling is to say it feels a lot like a 3 Series saloon, albeit one that’s lost a fraction of its sharpness. It still grips hard and feels more fun than an Audi A5 Sportback down a twisty road.

But focusing on high-speed agility is missing the point, the 3 GT’s trump card is its comfort. What it loses in handling to the saloon and Touring, it makes up for with an impeccable ride. On the 18-inch wheels of our test car it gently cushions the driver from large bumps and softens out ups and downs far better than any other 3 Series.

There’s absolutely no doubt the 3 Series GT has its place in the range but all this extra luxury does come at a price. Our 320d GT – at £31,310 – commands a premium of £2,900 over the saloon and £1,600 over the Touring. That’s a substantial increase, but then no other car offers the GT’s mix of comfort, space and driver engagement. The A5 Sportback comes close, but it’s far less spacious and costs about the same as the BMW.

On that basis, there’s a solid argument for opting for the 3 GT over one of its rivals. But, buyers looking for a 3 Series will still have the temptation of the cheaper saloon and Touring models to consider, and that – as it was with the 5 Series GT – could well be its downfall.