BMW M3 super-saloon gets a mid-life update, and we try it with the Competition Pack 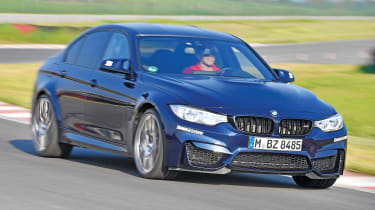 It’s business as usual for the revised M3. It’s still a brilliant super-saloon, but it lacks subtlety compared with Mercedes-AMG’s C 63 and feels more brutish. It’s not as sharp as the Alfa Giulia Quadrifoglio, either. Yet it’s still practical and composed, with lots of performance for the price.

The evergreen BMW M3 defines the hot junior executive saloon sector and has dominated the class for decades. However, rivals have caught up and surpassed it over the past few years, with competitors from Mercedes and Alfa Romeo offering more power and performance.

Now, the M3 is back with a mild facelift, although exterior changes are limited to a set of new hexagonal headlights. There’s also a new infotainment system, but it’s only a light reskin of the existing iDrive unit. 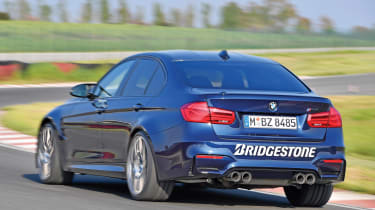 Power from the 3.0-litre twin-turbo straight-six remains unchanged for the Competition Pack, so with 444bhp and 550Nm of torque, the car still gives away some grunt to the Mercedes-AMG C 63, as well as Alfa Romeo’s new Giulia Quadrifoglio.

However, as before, it’s the torque figure that defines the M3’s character. It’s produced from just 1,850rpm, so at low revs and into the mid-range the motor is explosive – and in anything other than dry conditions it’ll fizz the back tyres with a flicker of the traction control light. 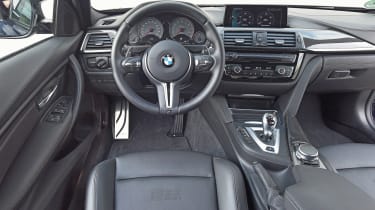 Make a good getaway with launch control and 0-62mph takes four seconds flat. No matter whether you’ve got the ESC on or off, the M3’s balance is beautiful. Sticky Michelin rubber and the wide front track mean you can really lean on the front axle through fast, sweeping bends, although this makes the mushy, lifeless steering all the more disappointing.

It does ride nicely, though, even on big wheels. On smooth roads the adaptive dampers’ Comfort setting is supple, while Sport and Sport Plus modes add extra body control, tying the M3’s mass down well.

Only high-speed direction changes cause the car to struggle, while a lift or a brush of the brakes helps to load the nose and extract a bit more bite from the front end.

It’s fair to say the M3’s engine isn’t the most characterful, although the Competition Pack’s noisier sports exhaust emits some snarls and crackles. At high revs the seven-speed DCT box can also be a bit jerky in manual mode. Leave it in auto at normal speeds and it shifts sweetly, though.