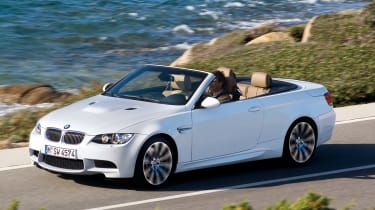 The purists will argue that the BMW M3 Convertible isn't the M3 to buy because it doesn't quite have the handling prowess to match the Coupe's. But there's no shame in opting for the Convertible model, as driving the two cars back-to-back reveals exactly how closely they are matched. And there's one thing you can't do in the Coupe – listen to that 4.0-litre V8 rev all the way to the 8,500rpm redline with the roof down.

BMW worked hard to make the E90 M3 Convertible handle just as well as the Coupe. The chassis is 30 per cent stiffer than the old M3 Convertible, and it shows in this car's handling, which is just as pin-sharp as the hard-top. The 4.0-litre V8 revs to 8,300rpm and boasts incredible pace, with a 0-62mph time of 5.3 seconds. The seven-speed DCT gearbox is best for outright pace but can be a little jerky at low speeds. The six-speed manual gearbox is a pleasure to use as you'd expect from BMW.

The M3 Convertible is a high-performance car, so running costs will be high. The semi-automatic transmission improves CO2 emissions from 297g/km to 269g/km, while fuel economy is bettered from 22.2mpg to 24.6mpg. A service package costs £1,000 and covers all servicing costs for five years or 60,000 miles.

The BMW M3 Convertible does a great job of retaining the perfectly proportioned lines of the M3 Coupe. The folding hard-top creates shut lines the Coupe doesn't have, but all in all it's one of the best-looking cars of its type. Thankfully it's not too garish either, with a relatively subtle bodykit, large exhausts and some bonnet scoops. The interior is well laid out and stylish, while fit and finish is up to BMW's high standards.

The M3's roof lowers in a relatively leisurely 30 seconds and is stowed in the top half of the boot. That cuts into the loading area but a 'convenient access' feature raises the roof up slightly so you can fit bags in before lowering it again. The back seats fold down flat, so it's even possible to carry longer items. If you're carrying passengers instead then you'll find plenty of room in the rear seats for two adults.

Despite its high-performance credentials the M3 Convertible has plenty of systems in place to keep you from crashing. It's got stability control, a system that helps improve cornering by braking wheels and one to maximise braking efficiency. It's also got driver, passenger and side airbags and the standard BMW 3 Series it's based on has a five-star Euro NCAP rating. As a relatively old car (it's been on sale since 2007) you can at least rest easy in the fact that it's had very few reliability issues in that time.