Can our Audi-loving editor be converted to BMW? This cutting-edge 5-Series could be the car to do it... 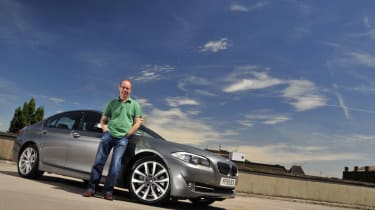 IT’S all too easy to feel like the odd one out sometimes. The only person who doesn’t know the storyline in EastEnders or Casualty, or who isn’t the least bit interested in the new Twilight Saga movie. Or, the ultimate of sacrileges... not being a BMW fan!

My colleagues at Auto Express treat me as some kind of minor weirdo because – whisper it – I’d choose a car wearing Audi’s four rings every time. But could I be forced to think again? Possibly, because BMW has thrown down the gauntlet – well, the keys – to one of its brand new 5-Series.

A very smart 535i SE, finished in Space Grey, has joined our fleet. Is it out of this world? It certainly has a stellar spec list. Standard equipment includes the kind of kit you’d expect from a car with an on-the-road price of £37,090 – keyless start, dynamic stability control, Bluetooth, iDrive control system, leather seats and so on.

At this early stage I haven’t had time to evaluate how good each of these options really is. I look forward to assessing them as the miles rack up. In my first few weeks as a Beemer Boy, the less expensive gadgets have impressed me.

These include the head-up display – which delivers on-screen info, including sat-nav directions and speed – and Surround-View (see opposite). Parking has never been easier, despite the fact that the BMW is a lot bigger than my previous Audi TT.

Am I beginning to sound like a fan? I think so. And my enthusiasm for the 5-Series is boosted by the interior. True, it’s not as striking as an Audi cabin, but fit and finish are first-rate.

Our car’s brushed aluminium trim gives a sporty, yet understated feel – and it’s one of the cheaper extras at £235. What’s more, the 535i is more of a junior 7-Series than a bloated 3-Series. It’s a big car, with loads of rear legroom and a huge boot. Yet it’s beautifully nimble and agile.

BMW has given its ‘Ultimate Driving Machine’ slogan a back seat, and adopted ‘Story of Joy’ branding instead. However, the famed handling and performance are undiluted. Our car’s six-cylinder petrol engine boasts 302bhp and a rapid 0-62mph time of 6.1 seconds. So average economy of 25.2mpg is reasonable, if not particularly special.

There’ll be plenty to report in the coming months, but first impressions are that I’m no longer quite the office outcast I once was!