Like the 5 and 7 Series, the new 6 Series Gran Turiso has an all-new platform and body structure. Much of the interior is designed from scratch, too, but the engines are transferred over from the old model with minor updates.

That means they’re as tried-and-tested as anything else in the executive car class, with both four and six-cylinder units featuring elsewhere in the range. Long term reliability is still difficult to assess, but given there’s nothing all that ground-breaking under the bonnet we’d be surprised if the 6 Series Gran Turismo was problematic. The air suspension could be an area of concern, however – it’s traditionally hugely expensive to replace should it go wrong.

On the safety front, the BMW is at the top of its game. The 6 Series GT hasn’t been tested by Euro NCAP, but the platform-sharing 5 and 7 Series have both received the full five stars for crash protection. As standard, all cars come with autonomous emergency braking, LED lights all-round with an adaptive headlight beam and BMW’s ConnectedDrive services. This includes an emergency call service that will get medical help to you automatically in the event of a serious crash. 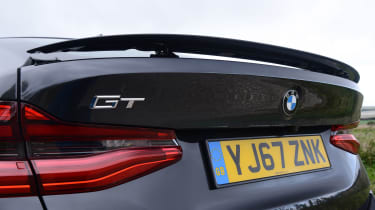 There’s also a vast array of optional safety kit. Alongside the semi-autonomous driving function, the £2,200 Driver Assistant Plus pack also includes front and rear cross traffic alert, lane keep assist and steering assist. A lesser pack can be specified which only adds tech that wartns of potential hazards, such as a traffic sign recognition system. Rivals from Mercedes and Volvo charge less for their safety kit, however.

As with all BMW models, the 6 Series GT is backed by a three-year, unlimited mileage warranty. This guarantee also comes with breakdown recovery for the same period. Paintwork on the car is covered for a three-year period, while the corrosion guarantee runs for 12 years. While none of this is exceptional, it is at least up to the industry standard.

BMW was one of the pioneers of the pre-paid servicing package, and like most other models in the brand’s range the 6 Series GT is available with a similar scheme.

Called Service Inclusive, it covers the first three scheduled trips to the dealer for just £399. This price covers the basic maintenance items, including oil changes and the air and ventilation filters. Petrol models are also treated to fresh spark plugs, while diesel machines are fitted with a new fuel filter.

As with all BMWs, the servicing schedule is variable based on the car’s use and mileage. However, the brand still recommends an annual check-up.